The Good Dog; A Personal Story

May 17, 2017 | We Love | Story by Tara Renner
In 2009, I was working for the state parks (still do). One of the perks of my job is that being centrally located, I am able to travel the state weekly and visit many beautiful state properties. One of the downsides, I soon learned, is that cruel people occasionally dump pets in those parks.
One bright spring day I drove in to a park to spot a heavily pregnant dog skulking at the edge of the woods near the lodge, my destination. Despite many attempts, the wily pup had eluded capture. I was afraid for the dog and her soon to be born puppies. She was extremely skittish and could not be approached.

Eventually, the dog gave birth somewhere in the woods, but she continued to lurk near the lodge. Park employees and guests tossed leftover fried chicken, dinner rolls, and bacon to the sad stray who would not allow pats or ear rubs. Everyone was on the hunt for her puppies.

Finally, a kitchen employee located the den. A kind conservation officer managed to trap mom, and she was taken to the local animal shelter. A rescue took the four fluffy, adorable puppies, but a new and more immediate threat developed. The shelter manager determined momma dog was ineligible for adoption because she was too feral.

I disagreed – I had seen intelligence in those sweet brown eyes. This dog just needed to be given a chance. The manager agreed to give her to me, and save the cost of euthanasia. But I had to pick her up within 24 hours.

Thus began six months of winning over the sorrowful, terrified, dirty mongrel. Teaching a mostly feral dog that humans are friends is an exercise in patience, grace, and love. I will never forget the first time I saw her tail wag, ever so slightly. The first time I touched a soft ear. The first time she didn’t run from my children.

We picked Willow for her name – a gentle, charming, bewitching soul who just needed a little time to come into her own. Although it was clear that Willow missed her puppies, once introduced to our other two dogs, she quickly bonded to her new dog family. And she slowly learned to love her human family too. Now she is one of the pack.

She is still jumpy around strangers, lawn mowers are growly monsters, and she’s not a dog park kind of dog. But our favorite nickname for her? The marshmallow dog (she’s soft and cuddly). Oh, and her favorite food is still fried chicken. 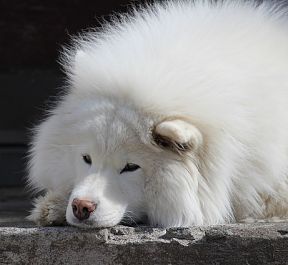 Tara is currently writing an article about her rescue dog Willow, soon to be published in a compilation of stories about rescued animals. She is the mom of many rescued animals, and foster m om of several others, and also two lovely human boys. She holds a B.S. degree in biology and resides in Indianapolis, Indiana.

If you enjoyed this post, you should read “How To Help Your Nervous Dog With Car Rides” here.

Do you have a personal pup story? We would love to hear it! Submit your story or leave a comment below!