October 17, 2016 | We Love | Story by Daniel Falconer
Moving into week three of life with my new best friend and companion Milo, I was starting to get into the rhythm of things and really enjoy every moment I spent with him. He was a quick-learner, extremely smart and kept me laughing. What I wasn’t expecting this week was to fall sick, and especially not my pup’s reaction to that…
Getting into the groove. At the beginning of my third week with Milo I couldn’t have been more excited to have him in my life. I was starting to dedicate all of my time to my dog – not the best when you’re a freelance writer! – but I just couldn’t help myself. At this time in his life, Milo needs the majority of my attention and I’m more than willing to give him that.

Unfortunate it was then when later in the week – on Wednesday – I was struck down by illness. I’m not sure entirely what was wrong with me – it was one of those odd illnesses that takes everything out of you and leaves you with aches and pains all over the place, but one that you cannot pinpoint and give a name to.

Feeling sorry for myself. So began the beginning of a long weekend with a lot of little niggles, all working together to become a major pain in the butt. I wanted to do nothing but wrap up warm and get in bed, but this was one of my first true personal tests with my new responsibilities. I may have been ill, but Milo still had to come first.

What I didn’t expect was Milo to have such incredible intuition. Almost immediately as I began to feel ill, he wanted to cuddle more often and sit with me, lick my hands and my face and keep me happy – it was honestly incredible! By being so caring he took my mind completely off the illness despite it lasting for a few days, and warmed my heart. I swelled with pride. He was becoming a fully-fledged member of the family.

“He was becoming a fully-fledged member of the family.”

Lots of progress. Keeping consistent with Milo, he’s now stopped weeing and pooping inside his crate at night altogether! He still has the odd accident by the backdoor if you don’t open it in time and let him out to the yard, but 90% of the time he’s doing everything right when it comes time to piddle or poop.

Now he’s in my bedroom in his crate at night, and joins me for an extra hour in bed in the morning – I personally don’t see any problem in bringing a pup into the bedroom! If it’s something that’s going to become routine – which it is in Milo’s case – it’s better off starting them early and getting them used to their nightly surroundings.

The BatPig. We’ve decided that Milo’s middle name will be Bruce. As in Bruce Wayne. As in the Batman. He has the ears for it. The reasoning for the ‘Pig’ ending rather than ‘Man’ or ‘Dog’ is because of the way he eats. He is a true scoffer. If there’s food in front of his face, he’s going to eat it. He has now been trained enough to leave his meals until he’s told he’s allowed to approach however, but once he’s there it’s game over. Good luck getting his attention before the food runs out.

What I would suggest if you’re thinking of getting a French Bulldog or a similar breed is a slow-feed bowl. They have grooves inside the bowl which means your pup will have to work for their supper, rather than just diving their head straight into a bowl of feed. This reduces the risk of choking, regurgitation and your dog eating so fast they end up being sick! Slow-gulp bowls are also available for their water so they don’t swallow a huge mouthful all at once.

Next Monday I’ll be taking you all through Milo’s fourth week with us! It’s been one heck of a ride so far – hope to see you back here! 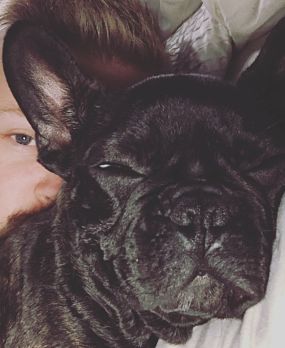 If you enjoyed this post, you should read “Milo Is Getting Snappy” here.