Milo Is Getting Snappy!

October 10, 2016 | We Love | Story by Daniel Falconer
So, week two of having the pup in the house and I can gladly say that the entire family have fallen for him! He’s had more visitors than my mum had when she gave birth to my sister and brother! My Great Aunt from Texas is also in the UK visiting and she’s completely enamored with him. He knows exactly how to wrap people around his little finger – he’s learning from his Dad fast…


Although we’re trying to do everything right and by the books, Milo did have a bit of a ‘moment’ this week. After learning to sit and give his paw, he was given a big chew treat, which he took outside to eat. My Mum went out to see him as he was eating and stroked his back as he had the treat. He began to growl at her, so she told him ‘no’ and then came in to tell me what had happened.

Going out there myself, I thought as I was the person who spent the most time with him, he would be alright with me stroking him. He did the same to me, and because I kept on stroking him around his back and his neck, he lunged at me and snarled.

I wasn’t entirely sure what to do next. I did a nervous laugh before realising the gravity of the situation, giving Milo a sharp tap on the nose and removing his treat, telling him he had been ‘naughty’ and making him go inside. I panicked and began scouring the internet to see the best course of action. All dog owners have different opinions and every pup can interpret their owner’s actions in ways different to others, but at this point I was open to any suggestions.

One that immediately jumped out at me was to go over to Milo whilst he had a bigger treat, with a handful of smaller ones to sprinkle next to him. This way, he would begin to understand that a human coming over to him whilst he was eating wasn’t necessarily a bad thing. We weren’t going to him to steal his treat, but rather to add to it. With my six-year-old brother and 12-year-old sister in the same house, I wasn’t about to let Milo become a snappy puppy. Small dogs can have a bad reputation when it comes to this type of behaviour, but I wasn’t about to let him become a part of the stereotype.

“Small dogs can have a bad reputation when it comes to this type of behavior, but I wasn’t about to let him become a part of the stereotype.”

Thankfully I can say now that he can be petted whilst chowing down on a treat. I also taught him to wait until he was told to go to his food bowl during meal times, so that he knows where his food comes from. I’ve got different members of the family to feed him at different times so he knows who’s in charge, and his temperament seems to have improved a lot. We will however be keeping a close eye on him when he has his food and the kids are near. I’m not having a snappy puppy! 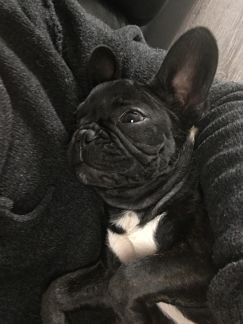 If you enjoyed this post, you should read “Milo On The Move” here.