How To Read Your Dog’s Emotional Cues

November 2, 2016 | We Learn | Tips from Leigh Green
Happiness, sadness, fear, aggression, confidence and playfulness… dogs feel all of it. If we pay close attention, they are constantly communicating their emotions to us. We want the best for our furry friends, and there are ways to read their well-being just by watching
Though all dogs are different, they share many of the same patterns for expressing their feelings. Most notably telling are their ears, eyes, fur, posture, mouths, and tails. There are also some often misunderstood cues that might look like the dog is angry or sad, when really they’re feeling playful or submissive.

Dogs often respond minimally to physical pain or discomfort. It can take months for an owner to even know they have an ailment. On the other hand, dogs are highly responsive to the positive feelings of love and, alternately, suffer significantly when fearful or stressed for prolonged periods. It is usually immediately evident whether a dog is experiencing positive or negative emotions, and here are some of the nuances to look out for.

Sadness or Depression. Dogs are primarily social creatures. When they are feeling sad, they retreat from others with their whole demeanor. Their eyes will be downcast and avoidant, their posture stooped, tail down, and their movements slowed. They may respond and eat far less than usual. Attention and affection from their humans, with a focus on regular exercise typically draw them out of their funk within a few days.

Submission or Fear? Submission and fear are two sides of the same coin, with cues for both emotions looking nearly identical. While submission is relatively comfortable for a dog, often shown to favored (or dominant) humans, fear is a negative experience for a dog. In both instances, the dog will essentially “flatten out”, laying their ears back, tucking their tails, and assuming a low, crouched posture. In both instances, the dog might bare their teeth, though one is smiling and one is warning. The primary differences between the two are that a submissive dog will remain affectionate, welcoming touch from others, offering a paw, and even laying on their back to expose their belly. A fearful dog, on the other hand, will show more tension by trembling, yelping, and hunching over, essentially wishing to disappear.

“A fearful dog, on the other hand, will show more tension by trembling, yelping, and hunching over, essentially wishing to disappear”
Aggression. Dogs are all on a spectrum of territorialism, and often their aggression comes out when they sense that their territory or authority are being threatened. An aggressive dog will seemingly expand in all directions, with a fluffed tail pointing up or extended straight behind them, ears erect or pressed forward, fur along the spine spiked straight up, and eyes bulging. Dogs will bare their teeth in warning, and their posture will lunge forward. Though very normal, these cues can be signs that your dog could be looking for a fight and isn’t in the right state of mind to be around children or other dogs.

Happiness and Playfulness. Our dogs are at their best when they’re happy and playful. There are some sure signs that your dog is feeling merry. First and foremost, look for the tell-tale sign of a wildly wagging tail. Happy dogs also have very ready, very relaxed looks to them, with their ears and eyes up and open, giving steady eye contact. Their mouths are often slightly ajar or literally “smiling” with a tongue sometimes hanging out. Their posture will be upright but not tense, and they might wiggle their rear end or run in silly circles. Often, a happy dog will bait you to play with them by laying forward on their front legs looking up at you.

When we attend to the full spectrum of emotional cues that our dogs provide, we can communicate with them better. An understood dog is a happy dog, and a happy dog means a happy owner. 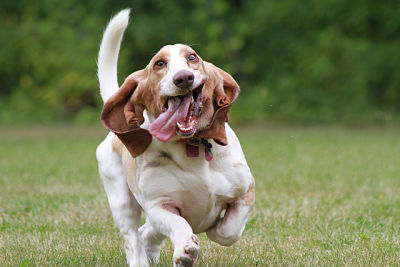 If you enjoyed this post, you should read “Five Reasons To Foster A Dog” here.

What are some emotional cues you’ve seen in your pup? Share below!