May 14, 2018 | We Learn | Story by Kasturi Das
While growing up in Assam, we were familiar with the fact that there are certain sections of people in Northeast India that eat dog meat. Dog meat is a delicacy in Northeastern states in India like Mizoram and Nagaland, much like mutton, pork and beef are for other communities.
The closest that I came to seeing a butchered dog was when a friend in my college in Meghalaya (one of the eight Northeastern states of India) showed me a picture of a boy holding the severed head of an Indian stray dog. That was way back in 2007.

With the social media boom, and easier access to information, I eventually came across videos of Indian dogs being clubbed to death, with heavy blows to their heads, in some part of Nagaland.

Last September, I took a trip through Meghalaya with my 19-year-old cousin and our driver. Meghalaya is known for the most beautiful waterfalls, caves, and the two wettest places on Earth. We were on our way to Jowai, to see the Krangshuri Falls. On the way we saw a bridge, and decided to halt for a while to admire the beautiful landscape.

On the opposite side of the bridge was a Maruti 800 car, the ones that are found commonly in the capital city, Shillong. Next to the car were two young men, and two elderly villagers. It was an isolated area, in the middle of a highway. The only people on that bridge were the seven of us. One of the young men came up to me, asking for a pen. He was rather courteous, as most people are in that region are. He had a bunch of papers in his hand, and seemed to be doing some calculations. He thanked me with a smile, and went off. Our driver, who had disappeared into the woods to take a leak came to us, grinning, “Look inside that car”, he said. He looked amused.

My sister and I went over to the car, and were horrified to see four dogs, their snouts tied up, and bundled into sacks. It became clear that a deal had just been made – dogs exchanged between the villagers and the smugglers. Our presence at the spot seemed to only slightly alarm the dog smuggling party. We were just two harmless looking girls that appeared to be fascinated with the dogs in the sacks.

I asked the courteous smuggler, the one who had earlier asked me for a pen, where they were taking the dogs. “Aizawl,” he said. Aizawl is a city in the state of Mizoram. “The villagers are selling them because they eat their chickens. We’re going to release them in Mizoram.” Pretending to buy their explanation, I made small talk, while also taking pictures of the number plate, the driver and the dogs. The villagers had sold off the strays for INR 500 (roughly $8) each, the smuggler told me. At least he was honest. The Maruti 800 sped off soon after. My heart felt heavy. I knew that the poor dogs were destined to be clubbed to death. 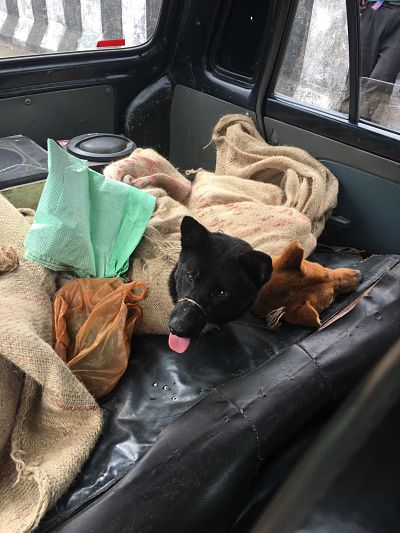 If you enjoyed this post, you should read Sharing Your Bed With Your Dog Is Amazing: Here’s Why here.

This is such a serious topic, one that creates controversy world wide. Do you have thoughts? Share below!