A Dog Without A Spleen

March 1, 2017 | We Love | Story by Evan Mbogai
When you meet Ricky, you will definitely be amazed by his unique personality. His personality is similar to that of a brother from a frat house living the Greek Life. Don’t be shocked if you see Ricky trying wearing sunglasses at night, smash a beer can on his head. This funny pooch is capable of wiggling, oscillating and shimmering his entire body in excitement.
Today we have an appointment with the vet. Ricky will be going his annual checkup which has been a routine ever since he was born. For the past 4 years the young pooch has grown attached to these visits to the veterinary. After a few checkups, the vet discovered a nodule located on Ricky’s spleen. From the many dog lessons I had gotten from my dad I had learnt that splenic nodules are not good.

After a few talks with the doctor, it was decided that the best decision for Ricky would be to have him undergo an operation. The operation would be done in order to remove the spleen. Spleen is one organ in the mammalian body that many mammals can survive without, including dogs. The organ does provide helpful services to the body of an animal. Though Ricky looked scared because this experience was new, not the normal checkup he was used to when he visits the clinic, he still took it like the brave boy that he was. The surgery went well and the spleen was removed.

After his splenectomy, I picked up Rick from the hospital. I cringed when I saw the size of the incision the doctor had made. The doctor had made a 7 inch cut on Ricky’s shaved belly. It seemed that before you reach up to the spleen in the body of a dog you have to pass through other internal organs, maybe that’s why he had such a big incision. This was really upsetting to me and definitely the healing and recovery process was going to be a painful one to Ricky. When I reached home as I lay him down I noticed that one of the end stitches on the wound had started opening up.

“When I reached home as I lay him down I noticed that one of the end stitches on the wound had started opening up.”

Ricky was home at last but then he was on the painkillers. His post-surgery mode was so depressing, the whole afternoon he was just lying down with watery eyes with the uncomfortable Ecollar orbiting his head. I was determined to nurse him back to recovery: I was going to be his mum, bedside vet, and personal nurse of the year till he recovered completely.

Things did not go as hoped regardless of the highest of hopes that I had and the best of motherly intentions. By Friday, midnight, Ricky was groaning in pain, his cries could be heard throughout the whole house. Even my kids were sad and crying. I called the ER at the animal hospital in Manhattan. It was a few minutes past two in the morning. The Vet on duty advised me to increase the painkillers dosage that Ricky was taking. This was supposed to make him sleep, well I did that but then it didn’t work at all. The whole night Ricky wailed and we had to stay with him.

At the break of dawn the first thing I did was call our vet and asked him to come over to my place. The vet showed up and checked his wound. It was oozy and coming apart. Ricky was a mess and I was hoping he wouldn’t get any secondary infection. The vet instructed that he be admitted to the hospital. He was then prepared for immediate surgery. All this was really traumatizing and scary for me, as much as him. The doctor said that the 7 inch incision had to be reopened again as there was an infection in the inside of his belly. Ricky had a staph infection that was spreading into his internal abdominal cavity right into his pancreas. This had caused his pancreas to get inflamed. The doctor did her best to make sure the insides of Ricky’s belly were totally cleared of the infection. She sampled the bacteria then sewed Ricky back up. After that she prescribed a range of antibiotics as we waited for the results.

At this point my head was running wild with questions. I was not ready to lose my dog. He was special to me. The what-ifs were just too much. My kids consoled me the whole time. The only thoughts that were running in my head were how important Ricky was to my family. I love him too much.

Ricky spent the next five days in the hospital under heavy medication. I paid him daily visits and made sure to bring his favorite bagel covered with cream cheese. He was miserable but, finally, he started getting better and returned to his usual self. It was a huge relief to us.

Ricky came back and regardless of the few setbacks here and there he was back to his obnoxious, annoying, and always lovable self. Later that evening, me and my kids were taking care of Ricky. It was kind of funny explaining to my two kids the importance behind Ricky’s surgery. They were a little unable to understand how one can survive without an internal body organ. At one point they even thought that Ricky would be handicapped. At the end of the day as Ricky slept peacefully I could not help but reflect on the relationship we have built with Rick for the past four years. This interesting dog with a unique personality definitely is a darling and a blessing to me and my family. 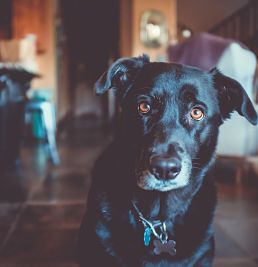 If you enjoyed this post, you should read “How To Make Your Dog Comfortable In A Hotel Room” here.