December 16, 2016 | We Love | Story by Pamela Hunt
On our regular four-mile loop through the city yesterday, Archie and I encountered several of the regulars: Charley, the feisty puggle; the border collies who twirl and spin into each other as we pass by; the delicate toy poodle who squeaks ferociously at us from his window seat perch.
We see these canine neighbors several times a week, year after year. Occasionally, I’ll realize that I haven’t seen one of our furry friends recently—the elderly golden retriever who had a cancerous tumor removed from his head land was last seen with a drainage tube sprouting behind his ear, or the rickety greyhound, still searching high and low for his rabbit—and wonder if they’re still with us.

Last spring, we crossed paths with a woman who shared her life with one our regulars, an uncharacteristically docile fox terrier. On that afternoon, she was alone. As we neared each other, I recognized the red, raw eyes, drooping shoulders, and slow, shuffling walk. I too have experienced that pain.

She stopped walking as tears flowed uncontrollably. Through her sob-interrupted explanation, I understood that the still-young terrier had become suddenly ill and did not survive. That day she was taking a final walk with only his memory to accompany her. Like many in the aftermath of a dog’s death, she avowed to never have a pet again—it’s too hard to say good-bye, I don’t want to be tied down.

The summer has come and gone, and though I was hoping she’d welcome a new dog into her world, I hadn’t seen her… until yesterday.

The petite terrier jerked his owner from tree to hydrant to mailbox post and back again. But the woman didn’t care. Her head held high, her jaunty stride, and her laughter as she nearly hogtied herself with the retractable leash told me she had returned from the empty-souled land we enter after loss.

“I’m so happy for you,” I said, giving her frisky new companion a wide berth to avoid having my shepherd ensnared in his leash. She looked down at the bundle of energy she was connected to and grinned. “I am, too.” 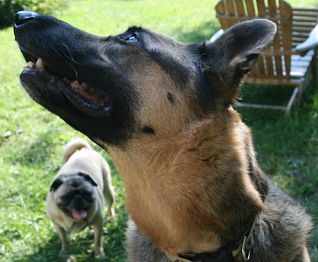 If you enjoyed this post, you should read “Remembering A Best Friend Before He’s Gone” here.