August 30, 2017 | We Learn | Tips from Marie Aymard
Every trainer has a repertoire of commands that they find to be most useful in their training programs and the way they work their clients’ dogs. One commands I find to be extremely useful and common across all trainers is the use of a ‘place’ command.
In theory, this command communicates to the dog how to go to a designated space and remain there until given permission to release. It is a great skill set for a dog to have to encourage settling in the house, and giving them a point of reference for a place to remain while you are not paying attention to them.

Initially when I train a place command, I use an elevated surface, one that is usually relatively small, that give the dog just enough space to sit, lay down and stand comfortably. I will practice from up close, giving the dog a command to climb onto the surface, using the command ‘place’, and ask them to offer a sit-stay or a down-stay on the box. I practice moving about them in a room, adding various distractions, and releasing them from position using a specific release word. I like to use “break” since it is not something I say frequently, and so it is very clear for my dog when I am ready for them to move. Using the box, it is very clear for the dog if they mess up (i.e. breaking their ‘place’ early) because I can return them to exactly where I left them. So, if I left my dog in a sit, and they leave their place early, I will return to them, take the leash, and put them back exactly where they were initially. It really creates a clear line of communication for the dog of what my expectations are for this exercise.

“It really creates a clear line of communication for the dog of what my expectations are for this exercise.”

As this becomes more consistent, I begin to add distance away from the ‘place’ itself. Being able to send the dog to their space is a huge part of this command being so usefully, so I increase distance slowly to ensure consistency and reliability. Using my leash and a small hand gesture, I will move about 4-6 feet away from the surface, and motion towards the surface and use light leash pressure to help guide the dog towards the familiar ‘place’. When I no longer need to use the pressure from the leash to help guide the dog, then I will add more and more distance and different starting points so that I can generalize that regardless of where I start from, the dog should go to their reference point.

Once this is completed, I will start generalizing to a variety of places so that regardless of the surface I gesture towards, the dog will understand to go and rest on that space. In the home, dog beds are a great option for this. Out at a park, using things like benches or tree stumps work great. Stay consistent with making sure your dog holds his ‘place’ until you have given permission to release. Always start with low levels of distraction, and as you build more consistency and reliability, increase the distractions. Not only does this command ensure a dog that is able to hang out calmly in the house, but it makes for a great trick to use at parks or on walks as your dog learns to perch on more unique objects! 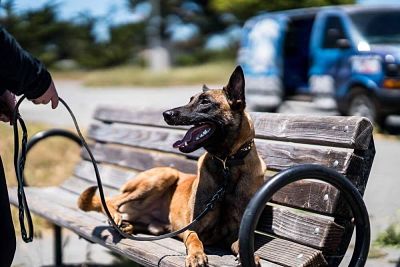 If you enjoyed this post, you should read Reasons To Reward Your Dog here.

Have you tried this before? Share your story below!