The Story of Five Rescues

September 16, 2016 | We Care | Story by Ingrid Saunders
About seven years ago, after moving away from San Francisco and all of the city life, I moved into a rural area. My home was just under one acre, so I knew I would be able to finally have a few pets. Little did I know that I would end up having five wonderful dogs with their own unique personalities. Here is my story of how I ended up getting five rescue dogs.
In 2010, I was approached by a volunteer of a rescue group that had found a tiny female Chihuahua that was really scared, but they said was really sweet. The minute I met her, I decided that I would take her in. After the adoption, we noticed that Princess was gaining lots of weight. A simple trip to the vet told us that, yes, she was pregnant.

Princess gave birth to three puppies, but only two survived. One of her puppies, named F., was larger than you could imagine. The second puppy, named T., was lovely, and sweet as can be. T. stopped growing at about 4lbs., but F. continued to grow, until I was able to capture my last picture of her in a coffee mug, before she sprouted to 10lbs. It was incredible to watch this tiny puppy the size of a pill bottle grow into a dog that ultimately became 18lbs of pure love.

After, the two puppies and the mom got bigger, and after everyone was pretty much doing their own thing playing in the yard, I noticed this tiny little black dog freezing in my front lawn, in the dead of January. All I could tell was he was really small and emaciated, and he was having a hard time walking on his back legs. I’m one of those people that has to save every animal: It took me about three hours of sitting in the frozen grass with blankets trying to lure him in. He finally just collapsed and was laying on his side freezing, and I don’t think he could feel his back legs. I immediately called my veterinarian and let them know that I had found a small male dog that was freezing to death and was nothing but bones. The vet told me to bring him in immediately and I did.

“The vet told me to bring him in immediately and I did.”

A visit at the vet revealed that this little black male dog was a puppy and he was almost on the brink of death. The veterinarian asked me if I was going to keep him. What was I going to do? I could not turn this little guy over to anyone else because he was so scared and I knew anyone else would have a hard time with him. I said “yes” and Mister S. became the only male dog in my home. He went from a tiny emaciated puppy to a very happy and SPOILED fellow. He’s got his own place on the couch where he can look out the window, he gets special pets from me all day long, and at night he sleeps right in front of my stomach rolled up in a ball.

This last Christmas, I was starting to have baby puppy blues, so as a gift I got my final dog. Tinkles was a little rescue puppy that was found with her mother, starving to death in the snow. All of her puppies had died but Tinkles. She was only eight weeks old when I got her, but she has been nothing but joy in my household. Granted, she has given Mr. S. a run for his money. She is smart, active, and is also quite protective of my home. I’m very fortunate to have adopted such a wonderful little girl.

My bit of advice to anyone that is thinking of taking on the responsibility of adopting a pet is to really think about the area you live in, the space, and of course how your other animals will handle a new pet in the home. Mine are used to foster dogs, having had many over the years, and now they are all “welcome, we have lots of food and treats” to other dogs. Having as many pets as I do is time consuming, but I am blessed to work at home, so I spend lots of time with my dogs. It’s been a fun ride with this many dogs, I love the life I have with them, and cold nights are certainly crowded and warm! 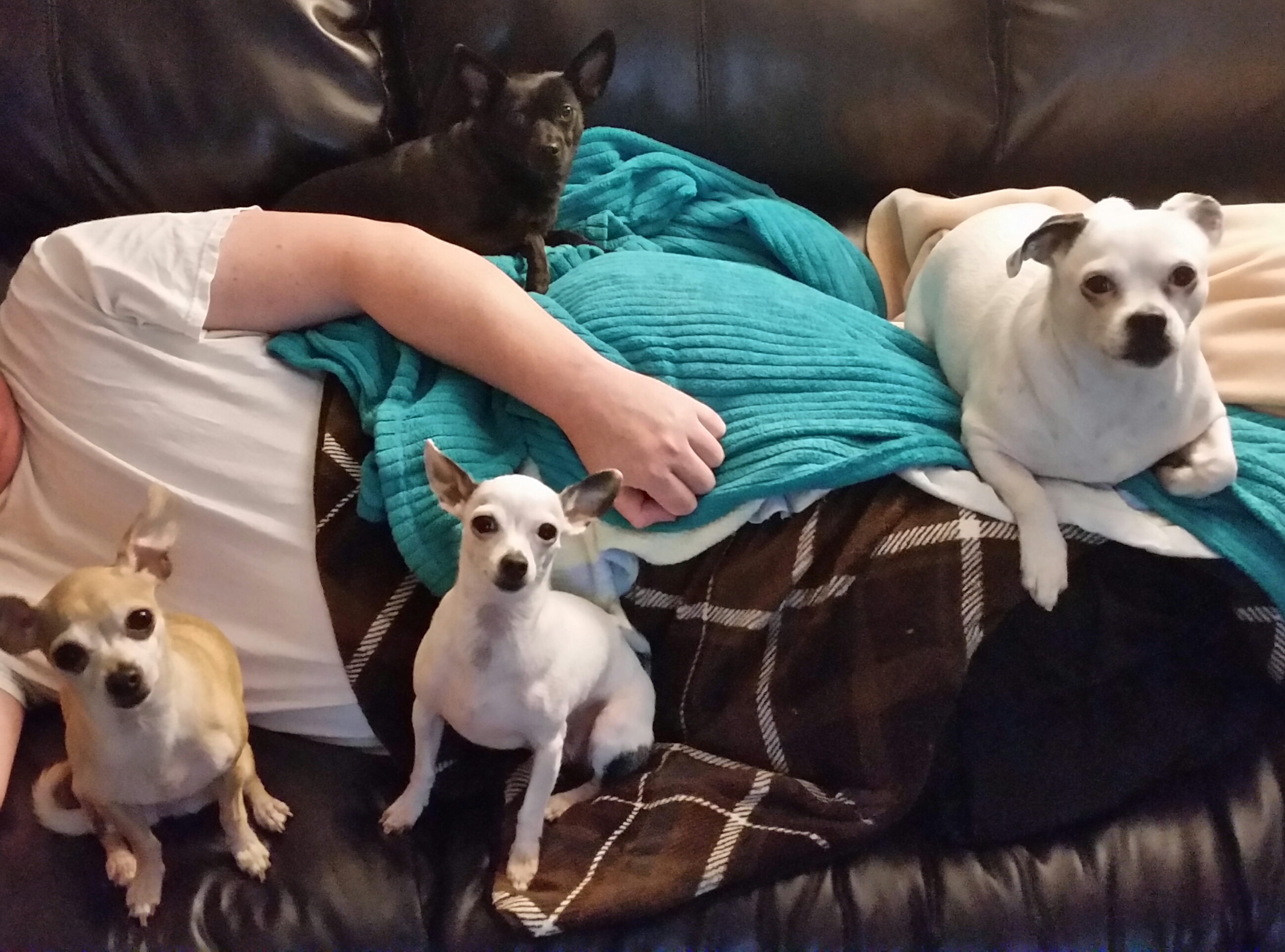 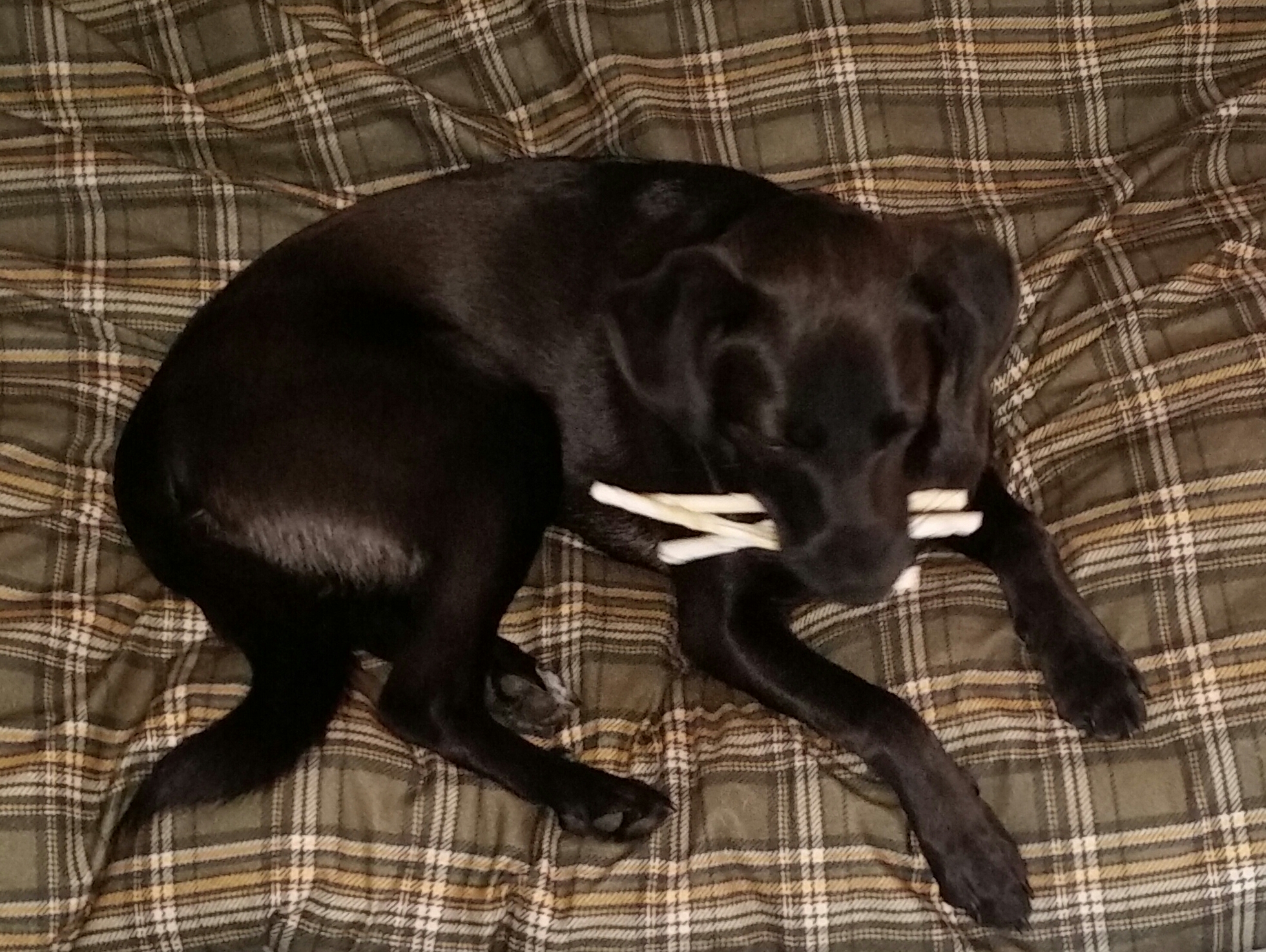