August 17, 2016 | We Care | Story by Jesse Ellyson
Once upon a time there were two little puppies. Neither of them had a name. One was a boy puppy and one was a girl puppy. He was her brother and she was his sister. It has never been clear where they came from.
Were they abandoned? Were they runaways? Were they born out on the street? We have no way of knowing. All we know is that one dark morning before the sun came up these two nameless puppies appeared on our doorstep. What could we do but bring them in?

We did not want puppies and promptly put out the word that we had them to give to anyone who wanted them. We told friends, we told co-workers, we told everyone we met. No one wanted the two nameless puppies. We kept them for a time.

The boy puppy, we soon found, was not very bright. The girl puppy was definitely the smarter of the two. We gave them treats every day. The girl, who was much smaller than the boy, would jump up on the couch and leave her treat there. Then she would come back down and steal the boy’s treat. She would then jump back up on the couch and eat both treats. She scooted to the edge of the couch to eat so that the boy could see her from the floor. The boy puppy couldn’t figure out how to get up there so he sat and cried while she ate both treats. We would give him another treat when we saw this happening. But we must wonder how many times he went without.

One day a lady came to our door selling some odd little thing. Candy, perhaps, or some other such thing that is so often sold door to door. Mom answered the door that day. She listened to the lady and then said, “I’ll take what you’re selling if you’ll take these.” She pointed to the two little ugly puppies who were sitting on the floor behind her. The lady agreed to the deal but she would only take one of the puppies. She took the girl, of course.

“She took the girl, of course.”

That left us with the not-so-bright one. Poor little thing. It wasn’t too long before we realized that we would never get rid of this little fellow. We knew it was time to name him. We had put off naming the two ugly pups because to do so would have made it impossible to give them up. Now it was too late. We were stuck with this pudgy faced, squat-legged little thing. He had been around the house now for over a month. He wasn’t going anywhere.

We looked at him and pondered. What name should we give him? What name was appropriate? Suggestions were made and disregarded. A day or two passed. We still couldn’t decide what to name such a pudgy-faced pup. And then Mom had a breakthrough. We would name him after his most notable feature. We named him for his face.

We learned soon enough that what Pudge lacked in brains and looks, he more than made up for with heart. Loyal and loving and playful, that’s our Pudge. 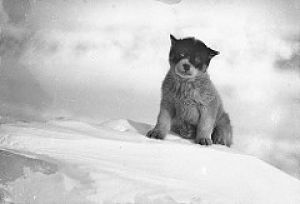