Rescuing A Princess: A Personal Story

March 16, 2018 | We Love | Story by Roxanna Blake
My friends with rescue pups often talk about how their dogs choose them.
It makes me jealous, because my Winnie didn’t choose me. She ignored me. Then again, she pretty much ignored everyone.  Winnie — or Winnie Words with Friends, as she was dubbed by her rescuers — wasn’t going to play the cute-rescue-dog game. She was over it.

A Princess In Peril.

Winnie wasn’t cut out to be a rescue dog. She’s an 11-pound white terrier mutt who looks like she belongs on someone’s lap. She was about three when we met, and it was clear she’d once been well-loved.

But something must have happened to her human, because she was found chained in a foreclosed home. We don’t know who found her, but we do know this: Her hair was matted, her skin was infected, and she’d damaged her teeth trying to chew her way out of prison.

She ended up in what was, at the time, a high-kill shelter. But a group (named, appropriately enough, Small Dog Rescue) recognized her for the princess she was. They rescued her, cleaned her up and put her in a foster home. And then she went on the adoption circuit.

If you’ve looked for or fostered rescue dogs, you know the routine. Weekends in front of pet-supply stores, where many eager and friendly dogs are waiting for a forever home.

In Winnie’s case, a couple of people even took her home for a trial period. Evidently, they failed Winnie’s test, and she went back in foster care. But as I said, she was over it. I suspect she thought being put on display was beneath her dignity.

“I suspect she thought being put on display was beneath her dignity.”

My husband and I found picture of her, and a handful of other dogs, on the internet. We set out to meet them all.

At our first meeting with Winnie, she ignored us. She wasn’t merely docile — she didn’t respond at all. The only time she seemed engaged at all was when she tried to drag us inside the pet store. (As we eventually discovered, Winnie much prefers the comforts of the indoors.) So, that was that. We went to meet other dogs.

The one I liked the most tried to bite my husband. I can’t remember all the reasons we rejected the others, but we did.  So–begrudgingly on my part–we went back to give Winnie another chance to interview us.

Same thing. I held her. Nothing. Evan picked her up. Nothing. He kept petting her. Then she started licking his hand. And looked into his eyes. That settled it.

A couple of days later we went to Small Dog Rescue to pick her up, sign the papers, etc. Her foster mother dropped her off and left. Winnie would not stop crying and scratching at the door. So instead of spending time at the table with the paperwork (Evan could take care of that), I sat on the floor talking to Winnie, feeding her a few treats and petting her when she let me.

In a few minutes, she was in my lap. By the time we left, she was my dog. My heart. Once she knew she had a loving home, she became the most affectionate dog I’d ever seen. When I have guests, I almost think she’d happily leave with one of them. She’s a glutton for affection: She asks everyone for belly rubs, gives juicy kisses and, before jumping became too difficult for her, she’d leap into any available lap.

It’s been six years now, and she’s still my heart. But she’s not all sweetness and light. She is a princess, after all.

For example: She has a brother, Baldrick, who weighs four times what she does. But Winnie is in charge, and she made that clear from day one. When we first brought Baldrick home two years ago and he joined us on the sofa, she leapt off it. She strolled to his bed, looked at all three of us, and proceeded to pee.

In the two years we’ve had Baldrick, Winnie has become even bossier. She herds me into my office in the morning and to bed at night. She marches into Evan’s office when she needs to go out. She generally ignores Baldrick, unless she’s barking her annoyance at him. However, she does deign to allow him to sniff her butt and her breath.

Sometimes, she even ignores me. She’ll snuggle, give me kisses and let me scratch behind her ears. But then she’ll jump up, move to the opposite end of the bed or sofa or room, make a nest with any available blanket, and settle in.

She is a princess. Sometimes, she just needs to get away from the commoners. After all, she rescued us. Shouldn’t that be enough? 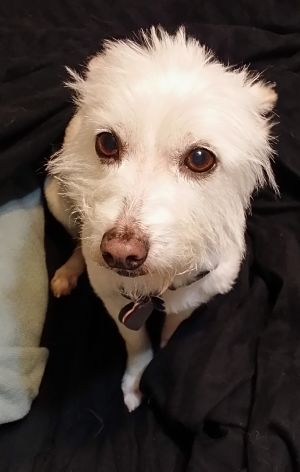 If you enjoyed this post, you should read How To Utilize Canine Training Equipment here.

Most of us have a rescue story-what’s yours? Share below or submit your story via the homepage.