Personal Story: I Am Obsessed With My Dog’s Poo

July 30, 2018 | We Love | Story by Kay Vandette
New dog owner here, and I am going to talk about poop. Or what happened to make me completely obsessed with my dog’s business.
First a few caveats: I am not a veterinary expert. The advice you will read about comes from my own discussions with a vet and vet tech as well as my own experience.

I am a relatively new dog mom, so the details I lay out in this story may have seemed obvious to a more experienced pet parent as to their cause. Lulu, a Pug mix officially became a member of my family in May of this year. She went through a foster family before she came to me and adjusted fairly well. She’s a friendly, active, and sprightly little Puggle. And for a few weeks, everything was going just fine.

Until the Poo-apocalypse of two weeks ago. Suddenly Lulu’s appetite was gone. Before this she would voraciously wolf down her food, as pugs are like to do.

Tip for Fast Eaters: If your dog is a fast eater, so much so that they sometimes swallow their kibble whole or get sick, my vet tech suggested putting a small ball, like a tennis ball or some sort of item in the bowl that the pup would have to nibble around and interact with to get all the goodies.

Her appetite was down, her energy low, her usual tendencies to sniff every sniffable corner of the ground on our walks was gone, she was playing less and just seemed all around a little less spunky.

“she was playing less and just seemed all around a little less spunky.”

I went through the checklist:

She had just been spayed, it could be that.

She was adjusting to her new home, it could be that.

She was eating too many treats and was not interested in her usual meals.

But then things took a turn for the worse. You know that moment, when your dog scoots away like a shot, hunches their back in the “position” and squats right on the carpet. There’s nothing you can do but watch in terror as the inevitable soiling occurs.

This was just the beginning. Because not only was there a fresh surprise that I needed to clean, I noticed red. There was blood in her stool. Trying not to panic, trying to get my dog outside every hour or so, trying to catch her before she bolted to another corner of the house, and trying to decipher the cause, these were all things I was trying and failing to do.

Straight to the vet we went. When I called I described her symptoms but they did not ask for a sample. I didn’t realize bringing a baggie a poop to the vet is pretty common place. When we arrived, instead of asking me any questions or talking to me about the situation, a quick look over resulted in a diagnosis that she was fine and to just keep a watch over her. But fine, she was not. Her symptoms continued and I was frantically following her every move to catch her before there were any more surprises.

Tip for Poo Clean Up: If your pet is sick and the mess is everywhere, don’t panic and don’t immediately think you have to get the carpet replaced. A local cleaner will have recommendations for spot treatment and products you can use. Make sure you spot treat it with some sort of disinfectant because the last thing you want is her stepping in the same stuff that’s making her sick and spreading it around the house.

I went to another vet the next day. I drove 40 minutes to a town nearby because they had an opening. The first thing they asked for before anything else was to bring a sample.

Tip for Sample Collection: Bringing your dog’s poo with you to the vet might be a little, well, gross, but it’s part of keeping your pet healthy. And your vet has seen it all. It’s like the nurse at the vet said when I checked Lulu in, “You’ll never find anyone as happy to get poop as us”. I was told bringing a sample in the usual doggy waste bag that I used on her walks was perfectly fine.

And thank goodness I did, because after a quick checkup and actually discussing my dog’s symptoms with the vet, they found she had Hookworm and Whipworm. Two very nasty intestinal parasites and her symptoms made perfect sense. The vet explained that it’s almost never parasites, which is why the first vet might not have cared about a sample. Especially since she wasn’t throwing up or had a fever. Nerveless, if you find talking to your vet difficult, shop around. It’s just like finding a good doctor. You don’t have to settle for the closest one.

After the whole Sh***y ordeal, I am just thankful that I was able to talk to my vet and more importantly that they listened. I certainly hope it never happens again and my new dog is well on the mend, but if it does, I will be better equipped to handle the whole situation. 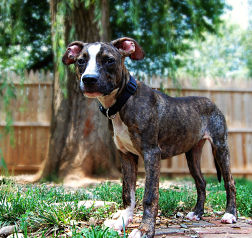 If you enjoyed this post, you should read Problem Solving The Recall-Part 2 here.