October 31, 2016 | We Love | Story by Daniel Falconer
This week I’ve been looking for a place for Milo to stay when I attend a wedding at the beginning of November. Unfortunately, he can’t come with us and I don’t want to put him into kennels at such a young age, so I’ve been scouring local dog sitters to find the perfect place for him to stay for a few days.
I don’t think there’s anything wrong with a good kennel mind you – I just think he’d be better suited to a home with fellow house-trained dogs and, it’ll be good for his temperament around other animals and people.

So, imagine my surprise when I discovered that a lovely young woman with her own 12-year-old Labrador was living on the road just behind my own!

I decided that this would be the perfect place for Milo. He wouldn’t be far from home and so would be used to the area when going on a walk and I would of course send him off packed with some of his favorite toys that remind him of home and help him settle down. We went to meet the woman who’d be taking care of him along with her own dog, Charlie and another that would also be staying with her at the same time, and we couldn’t have been happier with the way in which they got on. They just wanted to play with one another, though 12-year-old Charlie isn’t afraid to put his paw down and let Milo know who’s boss! So with all that settled I thought I could relax and get back into my routine. How wrong I was!

“So with all that settled I thought I could relax and get back into my routine. How wrong I was!”

A Minor Injury. Going out for a meal with some work colleagues, I got a call from my Mum who was looking after Milo to say he had jumped down a couple of steps and landed funny on his front, left leg. He was now hobbling around the house and they were going to take him to the emergency 24-hour vets just to make sure everything was OK.

When they returned I got another call. He had been given some painkillers to ease what could have been anything from a simple pull of the muscle to a fracture or break. The vet didn’t want to immediately do an X-ray as he wasn’t showing any major signs of pain, but did tell us to return and get one done if his limping hadn’t ceased in the next couple of days. Luckily we had a check-up booked for Milo already three days later, but I honestly couldn’t describe a worse feeling than the one I had seeing him hobble around the house. When your baby’s hurt, you can’t help but feel responsible and continuously question what you could have done to prevent it!

On the day of his check-up, he was still hobbling, but things did seem to be getting better. Milo’s vet decided that an X-ray wouldn’t be necessary unless he was still showing signs of lameness a week on and thankfully, the day after he seemed to be much better. It didn’t take him long to start rushing around the house, pinching toys out of my younger brother’s toy boxes and causing mischief once more! This is the Milo I like to see, no matter how chaotic it can be to manage him!

Walking can still be a pain. There’s no denying Milo is lazy. He absolutely hates being taken out for a walk. Usually I have to drag him for the first couple of minutes but once he gets into the swing of things, I like to think he enjoys himself. When he’s out with other dogs, he’ll walk for miles, so maybe I’ll introduce myself to some fellow dog walkers and arrange walk dates with them. I don’t want Milo to turn into an unhealthy lump and I was hoping with getting a dog that I could be out and about more myself! This is definitely something I’m going to work on in the weeks ahead. For now, though, I’ll have to continue taking some treats in my pocket to blackmail him with and get him outside! Maybe I’ll also get him a little winter coat. My Mum’s already got him an ‘Adidog’ hoody! Doh… 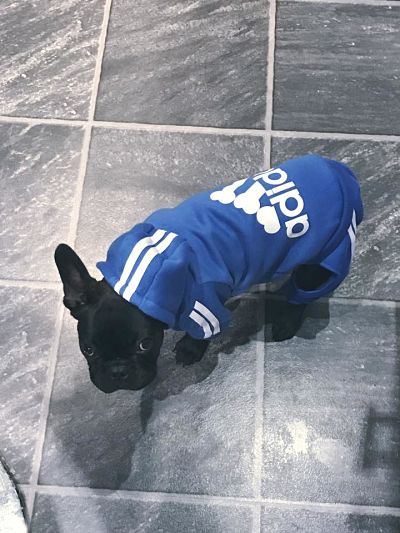 If you enjoyed this post, you should read “Milo Growing Up Fast” here.

Raising a puppy? Any medical scares? Leave a comment below!