July 6, 2016 | We Care | Story by Kaya Mey
I’m teaching my partner Apollo’s love language, “Play with him! Ask him to jump and play ball; he’ll go crazy and love it.”
It takes me a few weeks of, “You’ll have fun,” and I get a text- I was right. Their trust and play escalate to Apollo being thrown and flipped into the creek. Apollo couldn’t be more thrilled.

He’s a little Rat Terrier daredevil- adrenaline and all things physically dynamic is definitely in his ball park. I can see it written all over my partner’s face: he’s feeling guilty that he’s playing more with Apollo than his brother, Rawrz.  So, he includes Rawrz in the flipping-into-the-creek game. The Rawrz who fetches and wanders off with the ball. The Rawrz who is docile, more cuddly, emotionally present…The one who is SO GOOD AT TRICKS ****when treats are involved. The Rawrz who is naturally nervous… 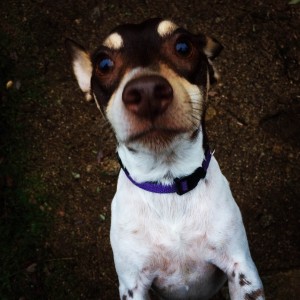 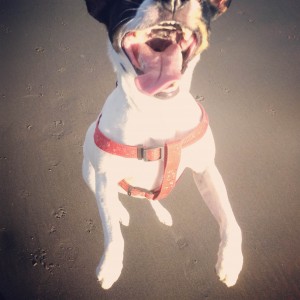 “With incredible zeal he will perform any and all tricks he knows.”

So now Rawrz is pretty skittish of the being that made him fly and spin into freezing depths. Such an all powerful being can’t be looked at. It’s best if my legs are available to hide between. There are no more excitable greetings at the door. My partner gets triggered. Rawrz is yelping as my other half tries to pull him over to play.

In an attempt to save the pieces before it’s too late I blurt out, “Honey, I understand you want to show Rawrz you love him, but making him do something when he’s scared isn’t going to help. He’s delicate, be sensitive with him. You met Apollo with play and energy, but Rawrz isn’t Apollo. Be gentle with him- try giving him treats and teaching him tricks- you know how he loves food.” Rawrz is constantly desperate for any delicious-smelling morsel. With incredible zeal he will perform any and all tricks he knows.

Right now the tension between fear and food is palpable. He takes the treat and runs. With pieces of the all-alluring cucumber, my partner continues to reel Rawrz into performing tricks. A delightfully rewarding game, with clear and stable rules: Rawrz relaxes as he finds himself in the tasty routine. He knows his place in the world of treats and tricks. It’s a few days later and his understanding of SirFlipsAllot shifts into GiverofTreats, and Rawrz rewards him with a delicate lick on his cheek. Rawrz gives a cuddle and sweetly presents his tummy and in turn the GiverofTreats coo’s and gifts feather-light strokes of love. Rawrz basks in the merging and is in doggy heaven. Rawrz knows how to relax, you can feel him slipping off into the Neptunian realm of the All Oneness of Bliss. It’s a joy to be present with that Sensitive Love in Rarwz, and the Play Love of Apollo. Litter mates and brothers, their souls crave for different experiences and communications of the same thing: Love.