February 15, 2017 | We Love | Story by Kasturi Das
I moved to my home city from Bangalore in October last year, to live with my parents. Out of the 28 years of my life, 10 were spent living away from home. So when my father was diagnosed with Mild Cognitive Impairment, I knew I had to come back. My mother wouldn’t be able to juggle everything at home – chores and emotions – on her own.
Guwahati, October 30. As I got out of the cab, I was welcomed by my parents and Smokie, our dear Dalmatian. The last time I had visited my parents was in June, a month before my father’s retirement. My parents looked the same, but it was Smokie who seemed unusually bored and lousy. He was happy to see me and wagged his tail vigorously, but he wasn’t frolicking around as much as he normally would. Smokie is seven. I counted his age in human years. It is probably just age catching up with Smokie, I thought to myself.

In the next few days, I was convinced that Smokie was growing old. It saddened me to see my baby grow old. But Smokie seemed happier. My younger brother, Bobby, who lives in Bangalore, was home for a while too. Smokie was pleased to the core. He loves to have people around him all the time.

Over the next few days, I started taking him out for walks every evening – without his leash – something that he absolutely loves. He goes berserk! How something as simple as a walk could possibly make a creature so tremendously happy is truly amazing. “Smokie, bola!” (Smokie, let’s go!* in Assamese) are the magic words that we need to utter to see him jumping in circles, wagging his tail at the highest possible speed. I swear I see a smile on his blotchy face. Smokie now waits every day for me to return from work so that we can go for his evening walk.

Not having a job has its perks – the biggest one is that you have all the time in the world. I was without a job for quite some time after making the move. I had more time to read, think, talk to my parents, talk to Smokie, do nothing. It is bliss (as long as you have enough balance in your bank account to sustain you). I started to spend more time with Smokie, talking to him, grooming him. We often underestimate the ability of animals to understand what we say. Talking to them makes them feel more connected, more loved and more included.

“Talking to them makes them feel more connected, more loved and more included.”

Smokie and I spent most winter nights snuggled up under a comforter, next to the heater, giving each other company while I read, and Smokie napped. Most days Smokie sleeps in my parents’ room on his own mattress, but once in a while he takes the liberty to sleep in my room – on my bed, of course. That makes him very happy. I place my hand on him and he heaves a sigh of contentment.

In the hustle bustle of our busy lives we often forget about the mental health of our pets. It takes a backseat, without us even noticing. We often get mired in our own miseries which blind us to the emotional needs of our fur babies.

In the past three months, Smokie has undergone remarkable change. There is a spring in his step, and he is as energetic as before. He smiles more often and looks excited most of the time. He looks forward to his evening walks and thoroughly enjoys exploring the neighborhood. I was wrong after all. It wasn’t old age creeping up on him. All Smokie needed was a healthy, bigger dose of love and attention.

As for me, I am employed again. But very little has changed. Dad and Smokie watch TV in the evenings. We go for walks every day. We have conversations regularly. We eat together and we nap together. They say love truly heals.  I saw it happen. 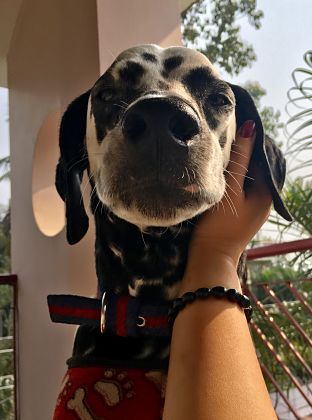 If you enjoyed this post, you should read “Agility Training And Your Dog” here.