How Clean Is Your Dog’s Mouth?

August 18, 2017 | We Care | Tips from Mark Rollins
We have all heard that old myth that a dog’s mouth is cleaner than a human’s.  We don’t need the Mythbusters blowing something up to prove how busted this myth is.
Of Course Your Dog’s Mouth Isn’t Clean, It’s Full of Bacteria. After all, we have all seen dogs sniff refuse on the ground and eat it, not to mention licking parts of its body without washing their mouth out afterwards. Some of it is so gross that I don’t really want to go into detail about it, and something that people don’t want to think about when a dog is licking their face.

Why dogs lick people’s faces, is a subject for a future article, but I’m sure you have already figured out that dogs mouths are not clean at all. Dogster reports that they have 600 kinds of bacteria in the mouth alone. However, dogs also have different immune systems than their human counterparts, so they can withstand a lot of the unhealthy things that they put in their mouths.

How Did this “Clean Dog’s Mouth” Myth Get Started? If a dog’s saliva was some sort of antiseptic; don’t you think that the medical science community would have capitalized on this?  When was the last time that you were at a hospital with an injury, and the doctor called in a dog to lick it?  If ever such a medieval medical practice existed, it has hopefully gone the way of the leech.

“If ever such a medieval medical practice existed, it has hopefully gone the way of the leech.”

Many have believed for a long time that a dog’s saliva is some kind of antiseptic. We all know that dogs lick their wounds, and it should be known that a dog’s wounds rarely get infected.

The fact is that Paw Nation has reported that a dog’s saliva is not the antiseptic. It is because the tongue is rough, and this is what keeps contaminants from an open wound.

According to iHeartDogs, there was some study in 1990 that suggested that there may be some bacterial growth inhibition in dog saliva. It turns out that this inhibition was only specific to certain strains of bacteria and it was only very slight.

What to Do When a Dog Licks You or Its Wounds. We really shouldn’t allow our own dogs to lick their wounds. There is a reason why most dogs wear Elizabethan collars (the funnel-shaped “cone of shame”), and that is to prevent a dog’s tongue getting into areas where it shouldn’t.

So yes, if a dog is licking your hand or face, it would be a good idea to wash your hands, as that can keep dog germs off of you. It is a good idea not to allow your dog to lick the face of you or your children either.

That isn’t just because of the germs, as allowing your dog to continually lick encourages the him or her to act unruly, so discourage this behavior when you can. 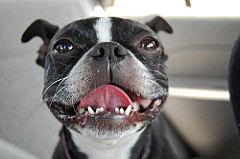 If you enjoyed this post, you should read Understanding The Pillars Of Operant Conditioning here.

What is your pup’s oral hygiene routine? Share below!