August 25, 2015 | We Love
We are a pretty habitual household: morning and evening romps at the dogpark, 5:30 am and pm feedings, morning cuddles for Wes, evening cuddles for Barn…
A new habit has recently taken hold and it isn’t something I would like to have stick around: Wesley, my darling fragile pup, has started to jump the fence at the dog park. For awhile, it was from the middle bench. Now it is the West bench. He hasn’t taken notice of the East bench but I am just waiting. So, in the interim, we either leash him or go on fence patrol, blocking the benches. We hiss at him, we clang the keys, we even try and snag him as he goes so gently over the top of the chain links. I think this is my fault too.

A bit of backstory: I live in Bayview which is a part of San Francisco that is undergoing tremendous change. With new attention from developers and city officials, we have gotten parks, waterfront walkways, support for small business, etc. etc. but at the end of the day, we’re still Bayview-lots of police, lots of low income people trying to make ends meet, and a ton of trash. We get good things for the spotlight, but then the spotlight goes away, and for the many people here that aren’t used to good things, caring for them is an unknown/unfamiliar thing. So, this beautiful new park we got in Bayview is in disrepair. The dogrun is overgrown and trash filled. There are owners that care, that cover up dug holes and pick up after their dogs, but to do so for all the owners that don’t is unrealistic-things aren’t well maintained in the long run. Outside the fences of the dogrun there is trash, and even grapevines which amazes me (the planner for this park must never have heard that grapes are deadly for dogs). There are an increasing number of rats too, because of the drought. And the rats love the trash. So the cycle continues…I dread the day a ball goes over the fence. I dread it with every fiber of my being. Usually the ball is lost forever in the jungle that is Heron’s Head. What a mess…and then I had a brilliant idea!

“The dogrun is overgrown and trash filled.”

Until Wes realized that the fence was not impenetrable. The fence was only something temporary. If a scary train comes, he could get away rather than wait for me to calm him. If a scary dog comes, he could escape without my help. Me lifting Barn past the barrier in essence gave Wes my permission to take the easy way out too. So now, we’re all on fence patrol. Thankfully, when he does get through our defenses, he runs straight to the car. We don’t scold him (he wouldn’t understand if we did), we don’t always force him back into the park (it depends on how bad he is shaking), but I do wish this new habit would go away.

If anyone has any ideas on how to stop this new trend, I would appreciate the help-I am all ears. And I have to say, even the birds are taking a fancy to this new circus act and have started to help with our fence patrol. 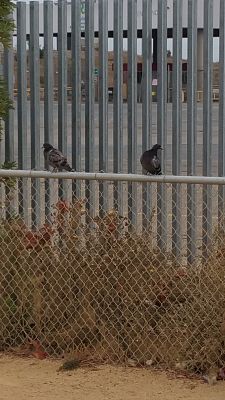