Why I Don’t Ask To Pet The Future Guide Dog

October 9, 2017 | We Care | Story by Abby Thompson
When I first started undergrad at the University of Georgia, along with the hundreds of frightened freshmen wandering around with maps, I started noticing that there were dozens of clumsy little puppies on campus with students. Each wore a tiny yellow vest that read, Guide Dog Foundation.
The students holding their brown leather leashes were puppy raisers, volunteers that commit to raising and socializing a puppy until it is ready to move on to the next phase of its training at the Guide Dog Foundation.

Let’s be honest, what dog lover sees an eight-week-old lab and doesn’t want to rush over to pet its sweet little face? I would have too, but that changed when my college roommate decided to apply to raise a puppy. After a formal interview at our house, my roommate came home with a tiny ball of yellow fur, a lab/golden retriever mix named Larimer. Lari was sweet, dopey, and a huge responsibility. You might think being able to take your puppy to class and to the movies is awesome, but there are lots of scenarios you don’t think about.

UGA has a huge campus, and sometimes you only have 15 minutes to make it across the campus, which is further hindered by a 20 pound puppy that has decided his legs no longer work and he absolutely must lay flat on his belly in the middle of the cross walk. Yes, more times than I can count I carried that doofus in the 90-degree heat across campus, because apparently walking is hard. It’s also not fun when you’re trying to meet people at a movie, and your now 80 pound puppy sees someone he knows at the back of the theater and bolts from your hand, practically jumping over people to get to the very back row. People at the theater were not as understanding as you might think. Or when your puppy poops in the middle of the student-learning center. Yes, that happened too, more than once

“Yes, that happened too, more than once.”

I would walk with my roommate to class, and five or six people would stop us to ask if they could pet Lari. Technically it’s okay to ask when the puppy is in the socialization part of his training, but it’s seriously inconvenient to the handler when multiple people do this.

This is the thing most people don’t think about when they encounter these irresistible puppies in the yellow vests; one of the most important parts of this process is that the dog learns when it’s time to work and when it’s time to play. When that vest is on, it’s work time. No distractions. No pit stops. Why? Because if that dog is going to lead a blind person across the street, it can mean life or death that the dog knows when it’s time to work. And while one person petting a puppy is not the end of the world, every moment of reinforcement helps the dog to know when it’s time to be serious, and all of us, as dog owners and lovers, should respect that. 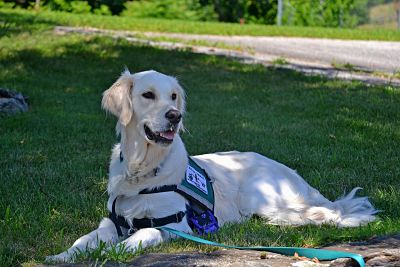 If you enjoyed this post, you should read 5 Natural Ways To Fight Ticks here.

What do you do when you encounter a service-dog-in-training? Share below: