May 16, 2018 | We Learn | Story by Kasturi Das
We were far from civilization. There were no police stations nearby. Nothing. So what do we do? How do we save the dogs?
I quickly put up a post on an animal rescue group on Facebook and tagged Nandini, a well-known an animal activist, in my home city Guwahati. I knew, if there was someone could save the dogs, it was her.

The waterfall was in a remote area, and we were with no mobile network. The waterfall was fun, but I couldn’t stop thinking about the poor dogs. Will anybody ever rescue them? Perhaps that was the last day that they were alive.

After a few hours away from civilization, we drove into town and what I saw on Facebook blew my mind. The post had gained tremendous momentum. Nandini had informed another animal activist in Meghalaya as well as the police. After a grueling search for the smugglers all day, the police traced down the car and the buyers of the dogs. A few thunderous slaps, and the smuggler spilled the truth. Not only did the police rescue the four dogs that we saw in that car, they found 22 other stray dogs bundled up to be smuggled! The racket was found to be led by a group of women from Mizoram.

“The racket was found to be led by a group of women from Mizoram.”

Two days later, the 26 dogs arrived in Guwahati (my home city) for rehabilitation. Unfortunately, Shillong, the capital city of Meghalaya, didn’t have proper space and infrastructure to shelter the dogs.  In India, and especially in the Northeastern part of the country, proper animal care centers are hard to be found. But the dogs were a fortunate lot as they were looked after at an NGO in Guwahati, and in a few days’ time, all 26 were adopted!

A few weeks later, I read about two similar incidents in the news. The police, with leads from animal lovers, managed to bust more dog meat rackets. But the menace is far from over.

The events that led to the rescue of the dogs were unexpected. The fact that the police managed to trace down and arrest the smugglers within the span of 24 hours was unbelievable, to say the least. I had zero hope, considering the affairs of the state, and the country as a whole (I love my country, but let’s be honest about its shortcomings).

I would give the sole credit for the success of this mission to all Nandini, who managed to convince the police to go after the men. Also perhaps I should mention that this mission was entirely led by women – another reason to be happy about.

Now comes the part that reeks of hypocrisy. Why is that news about consumption of dog meat in certain countries irk meat eaters? That’s because it revolves around issues of cruelty and barbarism. Take the international outrage over the Yulin Dog Meat Festival in China for instance. Ever since the rescue, there have been numerous debates on my social media about why it’s acceptable to eat other animals, but not dogs or cats. Why is it considered ‘normal’ to kill and devour a pig or a cow, but not a dog? This issue shall perhaps continue to create controversy for humanity as a whole for years to come. Let’s think about it! 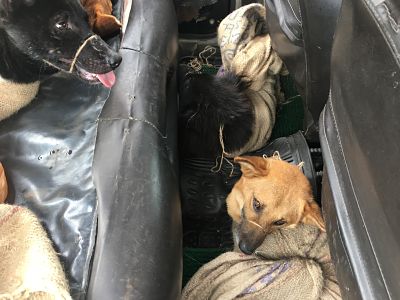 If you enjoyed this post, you should read Dog Meat (Part 1): A Rescue Story here.

Concluding a two part series, this brings up a lot of feelings. Please feel free share yours below!