Caring For A Dog Post Surgery: A Personal Story

November 8, 2017 | We Love | Story by Sarah Lucas
I was on my way home from a work trip when I received a text from my boyfriend that he was taking our 4-year-old pitbull terrier, Bentley, to the emergency vet because he had temporarily lost control of his back legs.
After an MRI and surgery, we found out that Bentley had herniated a disc, which then tore across five disc spaces. “Pitbulls are tough dogs so when they hurt themselves it’s never a small thing, it’s always something major,” the vet said to me over the phone.

When we got Bentley back two days later, he wasn’t his usual excited self because of the pain and pills. He also didn’t look like himself. A large portion of his back was shaved and had staples in it from the surgery, and the large brown spot on his back was slightly misaligned because the vet sewed him up crooked. She apologized profusely, but we didn’t care as his spot was the least of our worries.

We left the vet with three bottles of pills, a harness with handles to help him up and down the three flights of stairs to our apartment, and instructions to keep him still for the next two weeks. When we got home, my boyfriend and I had a hard time getting him up the steps in his harness. We were supposed to just lift the harness enough to help take some of the weight off of him, but we overdid it and ended up lifting him off the ground.

Once we were in our apartment, we helped him into his crate. He didn’t have full control over his back legs just yet, so we kept the harness on and guided him in. Once he laid down, we took the harness off and let him rest. Within an hour of being home, Bentley had an accident in his crate.

“Within an hour of being home, Bentley had an accident in his crate.”

Over the next two weeks he had an accident almost every day, sometimes twice a day. We were taking him out regularly, and even in the middle of the night, but the steroids he was on made him have to pee every couple of hours. I did a lot of laundry during those two weeks and once he stopped having accidents I bought him new beds because washing only did so much.

The other difficult task was administering his medicine. I had to create a spreadsheet with a pill schedule for him. All his pills had different doses and some needed to be taken twice a day while others needed to be taken three times a day. I ended up having to work from home in order to give him his pills at the right time. Well, that wasn’t the only reason. I also had to work from home because after a couple of days he started to feel better and was trying to walk around and jump up on the furniture.

To entertain him while keeping him still, I looked online for games that I could play with him that required little movement. One game that I found involved taking a muffin pan, filling a few cups with treats, and putting balls in all the cups so that Bentley had to sniff out the treats and move the balls to get to them. He didn’t play along. Instead, he sat by the window in his crate staring outside longingly.

Fortunately, when the two weeks were up, the vet was impressed with his recovery and he was cleared to go for walks again. Unfortunately, we were told that he’s not allowed to run around or play with other dogs ever again as it’s highly likely that he’ll tear another disc. We’ve replaced a lot of his play time with car rides, so Bentley doesn’t seem to miss running all that much. As long as he’s with his humans, he’s happy. 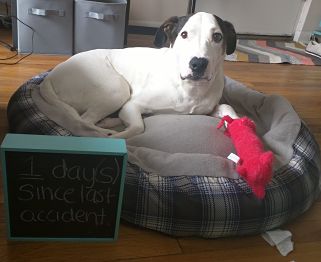 If you enjoyed this post, you should read No Tricks, Maybe Treats: Tips For A Safe Halloween With Your Dog here.