July 6, 2018 | We Learn | Tips from Stephanie Mayberry
When you turn your dog out in the yard, you don’t usually think about organic hazards that may be growing within the confines of your fence. The truth is, there are many types of plants that can make your dog sick – or worse – and mushrooms top the list.
Mushrooms are pretty prevalent in most areas. They grow in the yard, sometimes right out in the open, and they can be very tempting to a curious pup. Unfortunately, they can make your dog very sick, even kill him. So, here’s what you need to know.

Types of Mushrooms. There are many different species of mushrooms and toxic mushrooms are classified by four categories: A, B, C, D. Category A is the most toxic. These types are ranked according to the clinical signs of intoxication and the time of onset of those symptoms. Within each type are seven groups, numbered one through seven, which indicate the type of toxin contained.

• Category A – Destroy cells, primarily in the kidneys and liver

It should be noted that in many cases, the first symptoms are often gastrointestinal but progress to more severe symptoms including organ damage and central nervous system problems. The time between the onset of initial symptoms to the more severe organ damage and problems with the nervous system can be a up to 48 hours. The animal may even seem to recover or at least get better as the gastrointestinal problems decrease or disappear entirely. This period is the calm before the storm for several types of mushrooms as the toxins continue to attack the body, often undetected, and a day or so later the animal experiences the more severe symptoms which in some cases may lead to death.

Mushrooms that are Poisonous to Dogs.

There are the more specific symptoms associated with each area that is affected. Note that many of these conditions share symptoms so if you suspect your dog has eaten mushrooms, it is better to err on the side of caution, especially if you notice any of the symptoms listed here.

When to See a Veterinarian. If you suspect your dog has eaten mushrooms, you should call your vet immediately.

You may need to bring him in so that the doctor can provide a proper diagnosis and provide emergency medical intervention is the symptoms become severe. If possible, bring the mushroom with you so that it can be identified. In many cases, the doctor can get ahead of the situation if they know what type of mushroom (and what type of toxicity) they are dealing with. At the veterinarian’s office, your dog will be given a complete physical including urinalysis, a biochemistry profile, and complete blood count. The results of these tests will provide clues about the type of toxins the dog has ingested and will help in determining the best course of treatment. They may also take a sample from the stomach in order to identify the toxin. Treatment for a Dog that has Eaten Poisonous Mushrooms They type of treatment for poisonous mushroom ingestion is dependent on the type of mushrooms the dog ate. At any rate, mushroom poisoning in dogs is considered a medical emergency and most of the time the dog will have to be hospitalized. Activated charcoal administered by mouth is one of the more common treatments. It binds to the toxins that are in the stomach as well as intestines, allowing them to be flushed out of the body with causing further damage. Fluids are also given to help flush out the toxins and stabilize fluid levels. In some cases they may also include electrolytes. In some cases, depending on the type of mushroom ingested, vomiting may be induced.

“In some cases, depending on the type of mushroom ingested, vomiting may be induced.”

Long Term Effects of Mushroom Poisoning in Dogs. While a dog can die from mushroom poisoning, it can often be caught early enough to reduce any long-term effects that may occur. Not all poisonous mushrooms cause long term damage, but those that do can leave your dog with kidney damage, liver damage, nervous system damage, or a combination of the three. For instance, your dog may have a seizure disorder and will be required to take medication to manage the condition. Quite often, these conditions are manageable for owners who are willing to learn how to care for their special needs dog. It does require additional care, but there is no reason that your dog can still have a good quality of life if they see the veterinarian regularly and you follow the doctor’s orders.

Preventing Mushroom Poisoning in Dogs. Never assume that your dog won’t eat something he finds on the ground. When he is in your yard or when you are walking him, watch him carefully and be aware of your surroundings. If you see mushrooms, guide him away, restrain him so that he can’t get to them, and remove them. Treat every mushroom as if it is poisonous (especially if you don’t know the difference). Keeping your grass cut can help, but mushrooms can spring up overnight even in freshly cut lawns. The best thing you can do is be vigilant and check your yard every time you take your dog outside. He depends on you to keep him healthy, so take the time to look out for him. 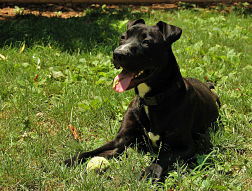 If you enjoyed this post, you should read Renting With Your Furry Companion here.

Please err on the side of caution and call your vet if you think your dog has eaten a mushroom. Share your thoughts below!