September 22, 2017 | We Love | Story by Melainie Duckworth
Have you ever looked another creature in the eye and felt an instant bond?
I found the sweetest German Shepherd puppy on a chicken farm this past winter. I knew he would love our children and protect them. He could be a wonderful member of the family. My husband and I debated whether or not we were ready for this sort of commitment, but it did not matter. It was love at first sight.

When we brought him home that first night, he was scared and snuggled in my arms most of the night. He acted lethargic and had some diarrhea that concerned me, but I thought he was stressed from the adoption.

I decided to take him to a trusted veterinarian the next day to have a checkup and get micro-chipped. When they heard about his lack of appetite that day and his continued diarrhea, they were worried. So, we were warned to monitor him and set up a follow-up appointment if it continued.

Unfortunately, our sick puppy was not interested in eating at all and would only drink a little milk or water. His upset stomach seemed to be getting worse instead of better. At his follow-up vet visit, the doctor performed lab tests to determine the cause, but they all came back negative. Feeling frustrated, I asked the doctor what he thought. He said to try some antibiotics and come back in a few days.

With a round of antibiotics and more attempts at force-feeding our precious pup, we headed back to the vet. This large breed dog was losing weight when he should have been growing exponentially. The vet told us we should return him to the previous owner and give up. I was heartbroken.

Surely there was something we could do. “Are you sure the antibiotics worked?” I asked the vet. He decided that maybe they were not strong enough and that we should syringe feed the puppy with prescription dog food. With a new plan of action, I had a renewed determination to make my sick puppy well again.

“With a new plan of action, I had a renewed determination to make my sick puppy well again.”

The poor little fellow was so weak, he didn’t fight us from shoving a syringe of liquefied food and antibiotics down his throat. Luckily, I work from home and had the time to nurse him back to health. Each successive visit showed rebound growth that was extremely encouraging.

Now this dear member of our family has grown into his role as friend and protector to our children. We are so glad to have devoted the time, effort, and money into his care. I would like to encourage all those adopting a sick puppy not to give up on them and trust your instincts. 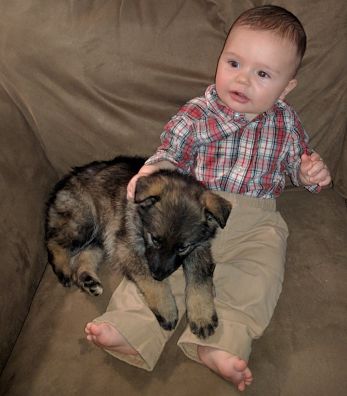 If you enjoyed this post, you should read All You Need To Know About Muzzles here.

Do you have a personal adoption story? We would love to share it! Comment below or submit via the homepage.