The Day That Puppies Ruled and Other Vignettes

July 13, 2015 | We Love
I am going to work my way backwards through my amazing dog-filled week.
Sunday: I volunteered for Family Dog Rescue, where Barnaby was rescued. Sunday was totally a fun-day: puppies galore. And hot guys. Hot guys holding puppies….let that sink in… These “Hot Guys Holding Puppies” moments were brought to you by a rescue calendar photo shoot and I was lucky enough to bring three adorable as buttons Corso mix puppies to the party. The sister pups are the sweetest things ever, all with varying levels of energy, but none lacking in love and cuddly warmth. Cue cute-pic.

This is peace after two hours of playing.

They were so cute in fact that I hardly had to interact with a single human being because they were so busy paying attention to the puppies. There was another litter there too, a terrier/poodle mix that was 1/10th the size of my pups, all from Family Dog. You know how sometimes they poop and then roll in it? Yes, that happened to the terrier pups, all 1lb. of them. And oddly, it didn’t detract from their cuteness. My Corso puppies had more on their minds than that-they were trouble too, the cute kind. 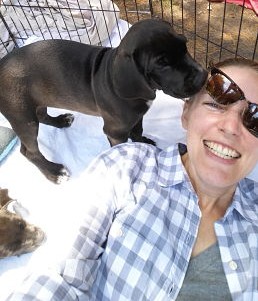 “Sunday was totally a fun-day: puppies galore. And hot guys.”

This was a real photo shoot, with cameras and models and camera techs. Even a photographer that would yell at people every once in awhile. For those of you that might like to see proof of an actual “Hot Guy” holding a Puppy here is one just for you. 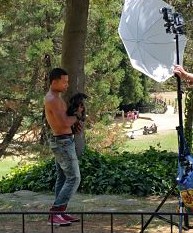 She was the most relaxed of them all-
with brindle paws and cheeks.

Saturday: There was Meetup 2 at Bernal Hill and a Dog Wedding. Two things you might know by now- I love my dogs and I don’t often prefer strangers to the dogs I love. Meetup allows me to balance those two things-my dogs buffer me from strangers, but those strangers play a very important role in my long term Barkswell plans. I would consider Meetup 2 a success! The Dog Wedding was also a success but I did not have my dogs as buffers-I had someone else’s. The mother of the bride dog killed it in the role, the ceremony was festive, and the weather was beautiful. I have no pictures to share ( I didn’t even think about it!) but might be able to add some later. There were celebratory blowing bubbles, drinking bubbly and dog treats, even a bow tie on a dachshund! I can’t say I have ever been to a dog wedding before, or that I will ever be invited to one again, but it was totally worth it and the welcome about the gods dividing us so that we are always in search of our whole selves was really moving, especially while I held the hand of my soon to be husband.

Friday: Barnaby, with as rough and tumble as he is, experiences many bumps and bruises. After our weekend excursion to the coast from the last post, he injured his paw, resulting, we think, in a foxtail mishap that caused his toe skin to become inflamed. The vet, after an emergency visit Friday morning, was concerned enough to want to put him under to do a bit of exploration. After hours at the vet, an IV, and more pills of antibiotics than any dog should have to digest, Barnaby heads home to recover. He was drugged and loopy, sleepy of course, and crashed on the couch for the rest of the evening. Wes, who is never without his brother, came to work with me. He acted drugged and loopy too, and slept probably as much as his brother. 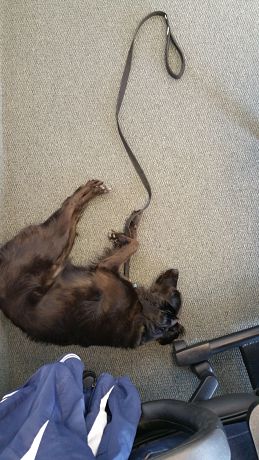 The office is so exciting.