August 23, 2018 | We Love | Story by Kasturi Das
I vaguely remember this incident from the time when I was a toddler. I felt a gentle tug at my skirt while I was loitering in the corridors of our old Assam-type* house. I looked down to find a tiny snout peeking out through an opening in a wooden box, biting at the flowy material. It was a German Spitz that my uncle had brought along on his trip home.
Ringo was my uncle’s dog (named after Ringo Starr), one of the many puppies that were born at his cousin’s house. Most of the pups from that litter found loving homes within our big family. Ringo had the most beautiful round, brown kohl lined eyes – I do not know if it’s bias, but I can’t recall seeing any other German Spitz as perfect as Ringo. He had a fluffy tail that looked freshly permed – quite envy worthy. I always thought it looked gorgeous – even better looking than human hair.

The initial years of Ringo’s life were quite adventurous. He often travelled in local buses and taxis (much to the amusement of the other passengers) with my uncle who had to travel for work; and devoured many lunches at roadside eateries in remote areas of Assam during his travels. But since my uncle had a job which required moving cities frequently, he chose to give Ringo a more stable life, and left him with us. We were a family of six. My parents, younger brother Bobby, paternal grandparents, and I. Ringo soon became the seventh.

A no nonsense dog, Ringo hated cats, barked madly at goats that passed by our house and fought a mongoose once. I got my own pet rabbit when I was nine. With that, a long held wish was fulfilled. Ringo killed Rolly Rabbit while I was at school. It was the worst day in my nine year old life. I wanted to be mad at Ringo for killing Rolly Rabbit, but I reasoned with myself and came to the conclusion that Ringo, after all, was an animal. It wasn’t really his fault. He also killed a sparrow I had saved. And a kitten. Ringo was a murderer. But we loved him.

Ringo was a dog of many talents. He understood English better than our mother tongue, Assamese; he could perform a number of tricks at the drop of a command (he was home trained by my uncle). He would walk on his hind legs for considerably long stretches, roll in whichever direction he was asked to; and once woke up our entire household when a young girl in the neighbourhood set herself on fire in the middle of the night. She was saved.

He was also a dog with integrity and principles. He wasn’t allowed on the beds or couches at home, and despite the kids tempting him with biscuits to jump on to the bed, he would refuse to budge. He took the lessons taught by his master seriously.

“He took the lessons taught by his master seriously.”

Surprisingly, Ringo never fell sick. Not even once. The vet would only visit us once or twice a year to administer the shots. Ringo recognised the bald vet all too well. If only snarls could kill. Ringo never ate fancy food (read: kibble, etc.). I believe those foods did not exist in India, or at least in our home city, during the mid 90s. Even now, buying branded dog food from the stores is still quite a luxury for most people in India. Ringo ate whatever the humans ate. Rice, lentils, meat and fish.

The only catastrophic moment in his life was when a clothespin got stuck in his tail and it was so bad that his beautiful tail had to be amputated. Even my mother’s prayers, offerings to the Gods and visits to the temple could not save Ringo’s tail. It was the worst time in Ringo’s life and ours. We all felt the pain. A pall of gloom had taken over the house during those few days. Ringo still managed to live a happy and healthy life even after losing his tail, and it was a joy to see him wag his little stump of a tail.

A few years later my parents, Bobby and I moved to another part of the city, and Ringo remained with our grandparents. By 15, Ringo had almost lost his hearing ability and most of his eyesight. His bark was weak too.

Guwahati is a city infamous for floods during the monsoons. There are certain parts of the city that experience this menace more than other localities every year, and our grandparents happened to live in one of those areas. One such monsoon, when the entire house was flooded, my grandfather scooped up Ringo and placed him on a table. But Ringo’s eyesight and sense of judgement had grown too weak by then. Ringo stumbled and drowned in the waters, in the veranda of the house. A death that was unforeseen, and abrupt. All of us were shattered, heartbroken, so much so that we avoided talking about it.

Ringo lived a good life. But death is merciless – it doesn’t matter how long or how well you’ve lived. But it is comforting to know that he lived well. It’s been more than a decade now since he’s been gone, but it still hurts tremendously to think about the way he died. For me, Ringo will always remain my first love, and the most beautiful dog that ever lived.
*Assam-type houses, which are generally single story, are commonly found in the Northeastern states of India. 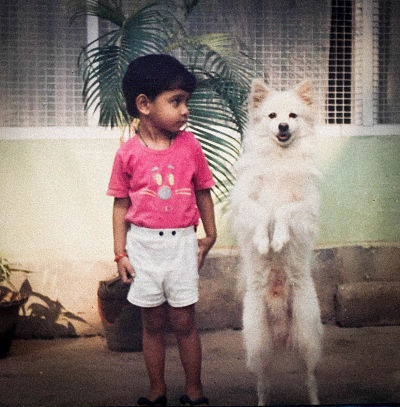 If you enjoyed this post, you should read Backchaining Behaviors here.

Do you have a favorite story about your pup? Share it in the comments or via the homepage!