May 13, 2015 | We Love
I have this deep rooted affection for Wes, my little man. I remember the day I found him, or better yet-the day he found me.
I was visiting a friend in the East Bay, and as she and I usually do, we ran errands together-Target, Bed Bath & Beyond, and lastly, Petco. I needed cat food. Really, that is all I thought I needed. I didn’t know that I needed a puppy until he needed me…

I just got teary thinking about that moment-I really do remember it vividly. I specifically told my friend not to let me get an animal. “Do NOT let me take home a dog.” I already had a dog named Jackson, a rescue from Animal Care and Control, a black lab/greyhound mix. As we walked by the entrance, the East Bay Animal Rescue signs pulled me in and I spotted a puppy behind a silver gate that looked JUST like Jack, only 1/10th the size. Even had the same white tuft on his chest. I remember it even now-and I remember exactly the moment I realized that the puppy I was drawn to had also caught the eye of a family with two small children. I tried waiting but, as I wasn’t going to take a puppy home, I thought it better to let them spend the time they felt they needed. So what do I do? I pick up the other black puppy. He was pretty cute too, as puppies make you believe. He had longer hair and a resigned look in his eye. And as with all puppies, the idea of letting him go was a difficult one.

“And I loved him. I don’t know if I only loved him because he needed me, or if, even now, I am in denial about my own need to be loved by him in return.”

Until I actually tried to put him down. He physically would not remove himself from me. His claws dug into my shirt, he wrapped his front legs around my arm…Wesley was holding on to me like I was his one and only chance. HIS.VERY.LAST.CHANCE.

And I loved him. I don’t know if I only loved him because he needed me, or if, even now, I am in denial about my own need to be loved by him in return. I will sometimes tell people that Jack needed help being socialized, and the vet suggested a puppy (which is all very true), and that I consciously made the decision to take in a second dog but I think the truth is that he needed a loving home, and somehow knew he would find that with me.

Do you want to know his pre-adoption name? Nestle. His whole litter was named after sweet treats. To me, he was my Dread Pirate Roberts, my Wesley. (Funny, the two personalities, now knowing he is on Prozac to level anxiety). *Princess Bride fans will note the misspelling, the Rescue attendant did her very best with his paperwork and I didn’t have the heart to correct it.

My life was never the same. He is still my baby, even five years later. He’s slowly grown into himself and the clues are that he cuddles with me with more confidence now, sleeping along my side in bed at night, pushing all four legs against me in attempts to gain his own space. And he will even sometimes try to wrestle me for a tennis ball. He isn’t perfect-in fact, some would say he is a hot mess, me included. But so much happens in our day to day-I am excited to share more stories with you-that I cannot imagine life without him, even in his crazy moments.

So, here is a raised glass, a cheer, to the day Wesley found me. 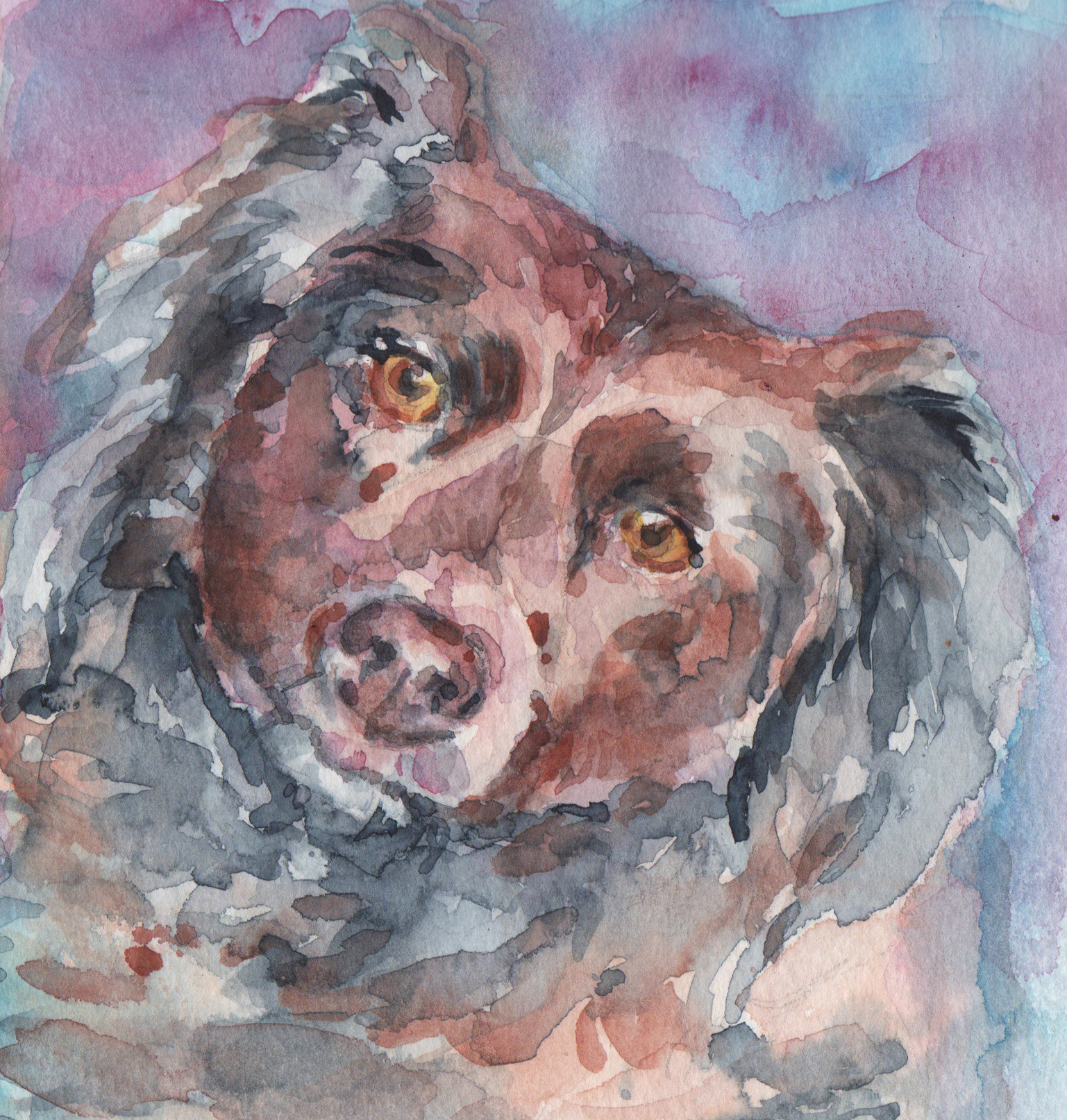 Thanks to Lisa Babbitt, Portraits in Watercolor (Peninsula Museum of Art, Burlingame) for doing this beautiful sketch of Wes!