June 23, 2016 | We Love | Story by Jeffers Haile
Two weeks after moving into my new house I was at the pet shelter looking for a dog. I hadn’t had a dog in years, my parents would be staying with me for the next year or two, I thought now more than ever was the right time.
Walking through the shelter and basically having to choose which dog I would take home and which dogs I would leave there was a sad experience. It almost resembles the feeling of playing God a little bit. There were two in particular that caught my eye:

Jacob- right away I realized he was a very handsome dog. He also came off as intelligent. I thought to myself that this could be the dog that would follow me around, go on trips with me, and be my pal.

Then there was Gracie. What a ham she was, as soon as I got close to her kennel she threw her body against the chain link, as if to say, “here you go, pet me.” She would do that every time I stopped petting her, she clearly knew how to get attention. I could also tell she was a shelter favorite, as she seemed to be a bit overweight, no doubt the staff falling for her obvious charm and giving her too many treats. Despite her loveable nature, I was drawn to Jacob and at first didn’t think much of Gracie.

“Gracie was a fairly easy dog to have. Jacob, on the other hand, turned out to be one of the most frightened and skittish dogs I had ever seen.”

I took a few days to think about it and one of the draws of Gracie was that I realized she would probably be great for my mother. My mom stays home a lot, she has had a severe back problem for years. To make things worse, her dog, one that I had grown up with as well, had recently passed away. I knew nothing was going to replace her old dog and I didn’t want anyone or anything to. That dog was the best companion for my mother, she brought her great joy and I would like to think she also brought her some pain relief. However, I couldn’t help but think maybe just having a dog around that adored my mom would at least help take her mind off things. I knew it was a tall order, but I decided that it was possible to adopt two dogs. Besides, I was betting that Gracie was going to attach herself to my mother anyways!

When it comes to shelter dogs, we really don’t know what we are going to get, until they have spent a good amount of time at our home. After just a few months, each dog started to show more of their characteristics. Gracie was a happy go lucky, wants-attention-all-the-time, food loving, kind of dog. Overall, Gracie was a fairly easy dog to have. Jacob, on the other hand, turned out to be one of the most frightened and skittish dogs I had ever seen. The crazy thing was, he didn’t display this behavior at the multiple meetings I had with him at the shelter.

I once saw him jump and run away at the sound of some paper being shuffled. This is no joke! My parents and I quickly came to the conclusion that he had to have been abused at some point in his life. The shelter had said he had been a stray most of his life and that definitely explained some of his behavior, but not all. He got to the point that I couldn’t even walk up to him without him running the other way, he simply was scared of everyone and everything. 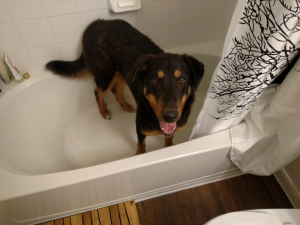 Jacob didn’t quite understand what a shower was.
Months went by and nothing changed. What was even more heartbreaking was the random moments he would have, where he was the sweetest dog in the world. While lying on a bed with me, he would be a completely different dog, calm and happy as could be. Same with going on walks. There were times where I became frustrated or started to lose hope that he would ever change. I couldn’t bring myself to take him back though, I knew no one else would want him if they knew how challenging he could be. I couldn’t do that to him, I knew it would damage his psyche further.

Slowly but surely however, he did change, but only with one person, my mother. He started following her around. More and more he became less afraid of her, he even started to do what she would say, despite his obvious fear (he would submit a lot). There it was, a dog I had completely intended to be mine, tried everything I could to make it that way, and yet he had chosen my mother. My first selfish feelings were of sadness, he had become my mother’s dog and there was nothing I could do about it. Shortly after being a baby about it though, I was very happy. I was happy for him, he had found someone he trusted. He would always be fearful, a little skittish, but his behavior has only improved around her. Simply put, he was happy, which made me happy. He has even started to warm up to my father, who he was terrified of for the first few months.

“The other best part was my mother, who was reluctant at first to have her own dog again: Jacob helped filled a void that was missing for her, and ultimately won her heart.”

The other best part was my mother, who was reluctant at first to have her own dog again: Jacob helped filled a void that was missing for her, and ultimately won her heart.

Gracie on the other hand had grown accustomed to having me around. A couple months after getting her, I left for my best friends wedding. When I returned she literally jumped up and wrapped her paws around me. After that she started following me around, slept in my room every night, looked at me with a sad face every time I left the house and was excited every time I came home. Somehow Gracie became my dog, without any persuasion or extra effort. She adored me and I in turn have come to love her. She has been one of the sweetest most loyal dogs I have ever had.

I think that’s how it supposed to go. I believe shelter dogs can be a lot like friends, sometimes we choose them and then sometimes, they choose us. 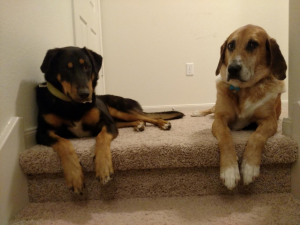 Jacob (left) and Gracie (right)
*More of Jeffers work can be viewed at http://www.hailejeffersblog.com. 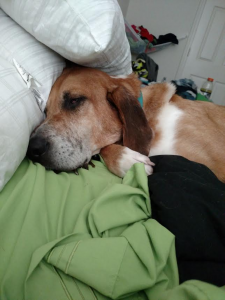 Gracie doing one of her favorite things, napping.