December 26, 2016 | We Love | Story by Ashley McLeod
Growing up, my home had always been a single dog home. There were usually multiple animals, including cats, guinea pigs, snakes, and most things in between, but it had always been one single dog. So when I moved into my new residence, a home with two dogs, I wasn’t sure what to expect. Now I live with a Havanese (or, in this house, a Muppet) and some sort of pug/chihuahua mix.
I thought I would have to make some major mental adjustments in order to live in a multi-dog home, but it was surprisingly easy. Maybe it’s because they’re both small, but I’ve found that having multiple dogs is easier to handle, personally, than one single dog. In fact, I do a lot less “dogging” now with two dogs than I ever did with my single dogs. I’ve found that a single dog’s love and focus is directed on his or her humans. When you have only one dog, you have their undivided attention. And if you have a dog that loves people, as I was always blessed with, you have a 24/7 companion.

“And if you have a dog that loves people, as I was always blessed with, you have a 24/7 companion.”

Not that I ever minded having a constant companion, but it was a lot like raising a child. You rarely get you time. But if you have multiple dogs, not only do they love you, but they love each other. When you’re busy working, they’re busy skittering across the hardwood playing tag. When a dog has another dog friend, I’ve found they don’t have that need to be constantly by your side. Now that I live with two dogs, I’ve found I do a lot less dog-related activities than I did when I had one single dog.

That’s not to say that having multiple dogs is always easier, especially when you’re training one dog, but not the other. Stormageddon has a sixth sense of when I’m training Clara. I’ve tried letting him out in the yard, putting him behind a baby gate, locking him in my room, you name it. He just knows when I’m trying to train Clara. He whines and barks and digs at the door or gate, making it difficult for her to concentrate on what I’m trying to teach her. And if he sees I have a treat for her, it’s all over. You just can’t give one dog a treat and not the other. There’s also the almost daily fights to deal with. The good thing about having one dog is that they were never around other dogs long enough to really get into fights. When you’ve got dogs around each other constantly, they’re going to disagree, just like humans. And I don’t know about your dogs, but it takes mine a while to calm down after a fight. 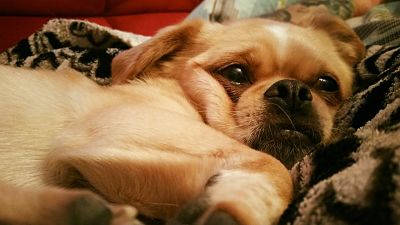 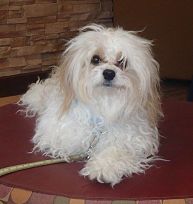 If you enjoyed this post, you should read “Bad Dog” here.

What about you, dear readers? What’s your experience living in a multi-dog or single dog household? Share below!