August 31, 2016 | We Love | Story by Susan Gabrielle
It was cold and dark and damp. It was lonely. And very scary. So very scary. She huddled behind a trash can, shivering in the cold. She didn’t like this back alley, not one bit. She wasn’t entirely certain how she’d come to be here. There’d been that cat in her yard. There’d been the mad chase across the lawn, up and over the fence, across the street, and then the cat had vanished.

Rather than turning for home she’d taken advantage of this rare moment of freedom and gone exploring. And then gotten lost. Was that yesterday? The day before? How long? And now here in this alley waiting for her people to come find her. She sure wished they would hurry up. She was hungry.

Suddenly there came a noise. What was that? Who’s there? She jumped up, excited. It must be her people come to get her. About time! But no. Not her people. Another dog. A scraggly looking thing if ever she saw one. She went to meet him.

As she approached, his lips curled back, teeth bared, a growl rumbling from his throat. She froze in fear. Why was he growling at her? She looked around but saw nowhere to run. Just brick walls and trash cans. She backed up, baring her own teeth, hackles raised in the hope of intimidating this creepy old flea bag.

He moved forward, slowly at first, pacing her. And then he lunged. He came at her in a fury of teeth and claws, ripping at her, hurting her. She fought back but she’d never had to do this before. She was civilized, not some crazy street mongrel. Why was this happening?

She fought for all she was worth but he was getting the better of her. Finally, there came a pause. She turned and ran deeper into the dead-end alley. A quick turn about, a desperate leap up onto a dumpster, across its surface, and down past the mad dog. A headlong rush out of the alley and into the street, narrowly missing a car, and off into the night.

At last she ran out of energy. She was in a parking lot, lights shining from the storefronts. She limped, tattered and torn, toward the light and collapsed there in front of a shoe store. She was finished. She couldn’t move another step forward. If that crazy street dog had followed her he’d have her. But he didn’t show up. She’d outrun him, or maybe he’d just let her go. Whatever. Time to sleep. Maybe her people would show up in the morning.

“Maybe her people would show up in the morning.”

Her people didn’t show up. Other people showed up and yelled at her. She got slowly to her feet and ran off. Another fence to jump and she found herself inside a park. This wasn’t so bad. At least there was grass here. But she was so hungry. She wandered off under a tree and fell asleep again in the shade.

She woke to the sound of a voice. Oh joy! Her people had found her!

No, not her people. But someone. Someone holding out something to her. It smelled like the hotdogs her people sometimes gave her. It looked like a hotdog too. She inched forward and gently took the gift from the person’s hand. Oh, so good to eat!

She felt the person’s hand pat her on the head. Yes, that’s nice. Maybe this person would take her to her people now? But the person turned and walked away.

Well, the person was probably going to get her people. She’d make it easier for everyone and just follow him. She rose unsteadily to her feet and softly padded along behind the person. But when he got to a car he wouldn’t let her in. She sat and watched him drive away. Why wouldn’t he take her to her people? Oh, she just wanted to go home!

The hotdog had hardly been filling but it had given her the quick burst of energy she needed. If her people weren’t going to come to her she’d have to find her way back to them. So she left the park and started walking. Across another street. Wasn’t this the one she’d crossed earlier? They all looked the same! Down a few blocks, across another street, another, another.

Days turned into weeks. She learned how to find food. Those trash cans in the alleys were full of good things to eat. Especially behind the restaurants. Such wonderful things could be found in those trash cans. Fish! She’d never had fish before. It was pretty good stuff!

And then it happened. She was in yet another alley, taking advantage of the bountiful garbage in the trash cans there, when she felt something wrap tightly around her neck. She turned to snarl at whatever had hold of her. There was a person with a stick of some kind. The stick had a loop of wire and it was pulling tighter and tighter around her neck. She fought to get away but it was no use. The man had her.

“She fought to get away but it was no use. The man had her.”

He pulled and dragged her away from her trash can. He dragged her out of the alley and toward a big ugly truck, the back doors hanging open. And then, lifting her by the cord around her neck, he tossed her into a cage in the back of the truck and slammed the door closed. She was trapped.

Once again, fear enveloped her. But then, this was nothing new. Fear was her constant companion these days. It was the only stable thing left to her. Everything around her changed but the fear was always there.  She settled down to see where the truck would take her. Maybe to her people.

When the truck stopped moving she waited. The door opened and there stood the man with the stick. She waited. What would happen now?

When the man opened the cage door she was ready. She lunged forward, past the man, onto the street.

Well, that was the plan, anyway. The man was too fast for her. Before she knew what was happening, the loop was tight around her neck again. She was dragged down to the pavement and into a building. And then, into another cage. And such noise!

All around here were similar cages, all with dogs barking or growling, crying and whimpering. The noise was deafening. What choice did she have but to add her own voice to the mix? She tilted her head back and howled long and hard. She threw all her frustration and fear into that plaintive wail. But no one came. At last, as the day wore on to night, the noise quieted and she found her escape in sleep.

Days passed. She was taken out of the cage now and then but that was never a good thing. It meant going back into a little room to get poked and prodded. There were needles. She didn’t like the needles. And then she would always be thrown back into the cage.

But little by little her coat got shinier, she gained weight, and she looked healthy. She felt pretty good, too. She just didn’t like being in the cage. She howled a lot. She cried more.

Strange people were always coming to look at her. They looked at all the dogs. Sometimes they took one of the dogs with them. Not her. They left her there in her cage. That was alright. Her own people would show up soon. They’d come and get her.

One day she woke to find a little boy staring in at her. He was standing on the tips of his toes and still could just barely see into her cage. There was something about him, though. Something she liked. She nudged her nose at him and he smiled. He stuck his fingers into her cage and she licked them. He giggled. Oh yes, she liked this little boy.

The little boy’s parents came up behind him. They started making lots of people noises at each other. Then one of the men who gave her food at night came over and they made people noises at him. Then they opened her cage, pulled her out, and took her to a little room where she could move around. The strange people came in with her. The little boy came too. He played with her and she was happy for the first time in so very long.

Days passed. Weeks passed. Eventually, years passed. She watched the little boy grow up. She got older. Her new people called her Bell. She couldn’t remember what her old people had called her but she did remember them. She remembered how they smelled, the sound of their voices, the way they smiled at her when they played with her. But her new people smelled good too and they smiled a lot. She liked them.

Over the years she’d chased cats out of her new yard, just like she had in her old yard. But when she got to the fence, she stopped. In all this time, she had never even considered leaping over that fence. No, not again. And, of course, now she couldn’t get over the fence if she wanted to. She was old. Her muzzle was gray. 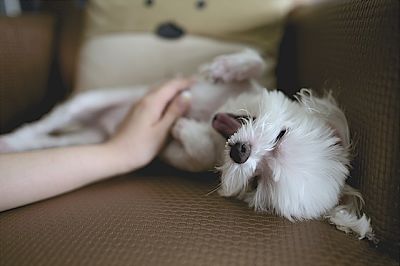