I live in Roanoke, Virginia, a town most recently in the spotlight for NOT being the Roanoke featured in the latest season of American Horror Story. Roanoke is in southwest Virginia, near the corner of the state. According to Google Maps, my house is 1 hour and 28 minutes (which makes for a nice day trip) away from the American Shakespeare Center in Staunton, Virginia. I am a big Shakespeare nerd and try my best to go to every show, dragging along anyone I can convince to come with me. I love going there. In fact, to quote Shakespeare himself in As You Like It, “I like this place and willingly could waste my time in it.”

Every season, September through April, they send a troupe of actors across the country performing multiple plays in repertory. However, the farthest west they reach is the Texarkana border. This season’s tour, Hungry Hearts, is presenting Shakespeare’s The Two Gentlemen of Verona. This show requires a dog to play the role of Crab, and I would say it’s safe to assume that the acting troupe wouldn’t want to take care of a dog (or a few dogs) for nine months. Therefore, they have launched the Hungry Hearts, Helping Dogs campaign.

In this campaign, the ASC requires every venue that books The Two Gentlemen of Verona to also supply a local shelter dog to play Crab. After the performance, they will attempt to get the dog adopted. This has already been proven to work, as after their first performance at the University of Virginia – Wise, they got the pup, Clyde, adopted to a great home of Shakespeare lovers! If every adoption attempt is successful, over two dozen dogs around the country will find a new home! Not only do they make the plays of William Shakespeare accessible to everyone from the young at age to the young at heart, they also care about enriching people’s (and pup’s) lives after they leave the theater.

“…they also care about enriching people’s (and pup’s) lives after they leave the theater. “

There is an old adage that circles the theater community: Never work with children or animals. Although there are no little ones on the tour, the ASC couldn’t care less about the pup stealing the spotlight. In fact, they welcome it! Getting a dog out of a shelter is more important to them.

If you hapenn to find yourself in the eastern half of the country, see if the American Shakespeare Center’s Helping Hearts tour is in a city near you. This year, the tour is also performing Shakespeare’s tale of the star-crossed lovers, Romeo and Juliet, and Thornton Wilder’s American classic, Our Town. If you happen to find yourself in southwest Virginia, make your way down to Staunton and visit the Blackfriars Playhouse. You can thank me later. 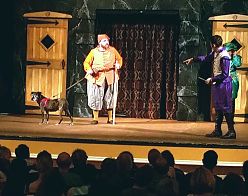