Going To The Birds

April 21, 2015 | We Love
I have birds on the brain today. You cooing and (literally) crappy things! Both Barnaby and Wesley have a love-hate relationship with the birds in our neighborhood.
Barnaby always take a pass at them-in the “hold me back mom, no really, hold me back” kind of way-he struggles at the leash, does a bob and weave, and then looks at me like he was just joshing with me. He’s never gotten one, not even while off leash and running free. He likes the thrill of the chase. Wesley just doesn’t understand what they are, poor thing, and is basically as terrified by them as he is of his own shadow.

This morning, while at the Dog Park, a crow was goading the gods by dive bombing Barnaby’s ball. Barn went borderline red zone trying to save his ball from attack-I have never in my life seen anything like it. The bird had a death wish and while Barn was running interference, Wesley cowered by the concrete bench, thinking the world was ending. Things were literally falling from the skies so I can barely blame him for his cowardice. Barn finally won by removing from the fight the ball that was so coveted. The crow was as large as my dog, but his cawing was the intimidating factor-that bird was something fierce.

“The bird had a death wish and while Barn was running interference, Wesley cowered by the concrete bench, thinking the world was ending.”

The flipside are the small birds that perch on the back fence. This itty bitty committee of birds are cute and nowhere near as vindictive as crows, or even pigeons, but that doesn’t make any difference to Wes and Barn, who sit and watch them with determination, patience, and an odd loyalty that I will describe in detail in another post. They speak to the boys, in hushed coos, as do the Crows through their caws, of a freedom my two will never comprehend. I wonder if they try to incite jealousy. Or, at the very least, a deep sense of wanderlust? I think the joke may very well be on them because I don’t think my dogs would trade an eternity of cuddles for bird like freedom.

We’ll talk about Squirrels and other chase-ables later-what does your pooch love to chase (or love to think about chasing)? 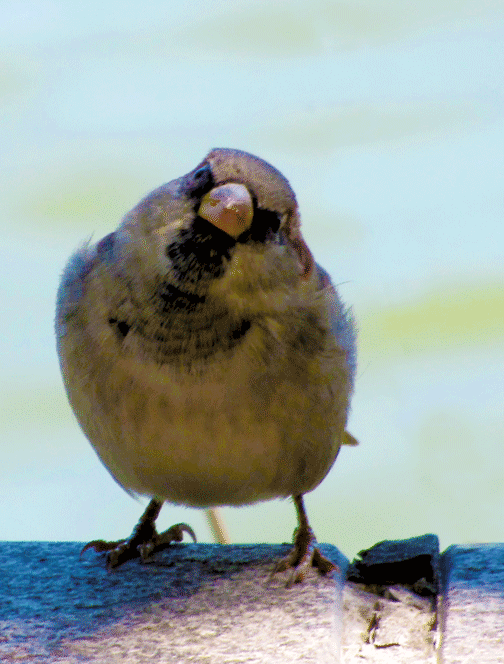