January 18, 2017 | We Learn | Tips from Mark Rollins
A few months ago, there was a lot of Internet chatter about how our dogs do not like being hugged by humans. Naturally, there was a lot of responses by owners claiming how “our dogs love it when we hug them.”
There is evidence to show that certain dogs do not like being hugged, but there are also testimonials from owners who claim that their dog loves it. So who is right in this debate? Actually, both sides. However, there is one thing that dogs don’t like, and it is being smothered.

How Do We Know that Our Dogs Don’t Like Being Hugged? Much of the chatter about hugs originates from an op-ed piece written in Psychology Today magazine by a single researcher named Stanley Coren. Mr. Coren has openly stated that his data collection was not from peer-reviewed study, which means that other scientists have not verified that the research was sound.

The research seems on the surface to be pretty reliable, though. According to The Washington Post, Mr. Coren searched Google and Flickr for photos of dog hugs, picking 250 at random, and discovered certain facial cues on the dog.

These cues were things like ears being down, half-moon eyes (the white part of the eyes clearly visible as a crescent), and head turned to avoid eye contact. He found that 81.6 percent of those pictures of hugged dog showed these visible signs, showing that perhaps that the dog was at least under some stress.

“He found that 81.6 percent of those pictures of hugged dog showed these visible signs, showing that perhaps that the dog was at least under some stress.”

Hug a Dog? Depends on the Dog. If owners insist on hugging their dogs, they should look for signs of stress. After all, dogs do not themselves “hug”, as putting their paws on anything is less out of affection, but more from a domination instinct.

However, many dogs have it in their nature to cuddle. Owners should reciprocate that, but look for signals for whether the dog doesn’t like the full embrace. For example, if they don’t lean into the hug, and lean away, it is a sign that you are causing them stress. You have to gauge this, but if their eyes don’t look “accepting” it is a good sign to stop hugging them.

It Is Not the Hugging, it’s the Smothering. Like most people, dogs probably don’t mind a good hug every once in a while. The issue is that if you hug the dog too hard, or if it feels smothered, he or she can lash out, trying to create personal space. This is one reason parents with small children should watch when their kids and dogs play together. 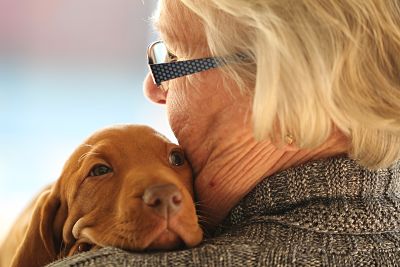 If you enjoyed this post, you should read “A Loving And Naughty Dog” here.

Have you noticed any signs of a dog loving (or hating!) a hug? Share it below!