April 14, 2017 | We Care | Tips from Elaine Coe
One morning my husband and I were getting ready for work when he called out from the kitchen, “Did you spill a glass of water? The floor is wet.” Of course, I didn’t: I would never not clean it up. We dismissed it as something Chloe, our beagle, probably knocked over (her water bowl, a cup she swiped from the table, etc.).
Other puddles appeared on our kitchen floor over the next few days. Finally, we realized Chloe was “relieving” herself at night. We were puzzled—she was 8 years old and had NEVER done this before.

Visiting the vet was in order. I described what had been going on: the puddles in the floor, Chloe’s unexplained weight loss, and her insatiable thirst. I think the vet knew the diagnosis immediately, but she said, “OK, I’m going to run some tests.”

Moments later, we had our answer: Chloe was diabetic.

My husband and I looked at each other in disbelief. Neither of us had ever heard of canine diabetes, but here it was, staring us in the eyes.

When the vet relayed the treatment plan, my needle-phobic husband responded, “Well, I can’t do it. I just can’t.” Above the lump in my throat, and knowing fully well that I’d never administered any type of shot in my life, I forced out the words, “I can do it.”

So it was. I gave Chloe two shots of insulin a day, took her to the vet twice a week for glucose monitoring, and held her a little tighter as often as I could. As a result, Chloe lived three, wonderful years after her diagnosis.

“As a result, Chloe lived three, wonderful years after her diagnosis.”

What You Should Know. Canine diabetes is very similar to diabetes in humans. Both diseases are caused by either a lack of insulin (Type 1), or an inadequate response to insulin (Type 2). Dogs generally fall into the first category, meaning they require insulin to survive.

The exact cause for canine diabetes is unknown, but it is believed that genetics, certain medications, autoimmune diseases, and chronic pancreatitis may play a role.

Diabetes can be managed if it’s detected early. Your dog’s success depends on how much you know. With proper treatment, dogs can live happy, healthy lives.

Symptoms to watch for:

Complications that can occur:

Remember, a diagnosis of canine diabetes is not a death sentence. You may feel overwhelmed at first, but if I can handle it, you can! 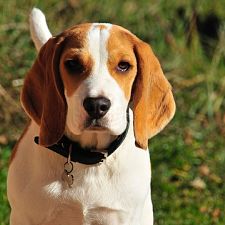 If you enjoyed this post, you should read “Paper Towels And Your Dog” here.

Has your pup suffered from canine diabetes? Share your story or treatment plan below: